Not doing a full review of Iron Man 3, but I really enjoyed it, so I decided to ramble on about my favorite parts:

-The opening. When Eiffel 65's "Blue" started playing, I almost turned to my sister and asked, "Is this 1998?" Then, behold, "1999" appeared on the screen. Close! Also one of my favorite Brian Boitano routines, which I tragically couldn't find on YouTube.

-The giant bunny. When the giant bunny made a micro-seconds-long appearance in an early IM3 trailer, the internet was befuddled and kinda freaked out. This emotional reaction to the giant bunny was shared by the characters in the movie as well.


-The ladies. When Pepper (Gwyneth Paltrow, always endearing in this role despite GOOP's fishmonger housecall obliviousness) and one of Tony's one-night-stands, Maya (Rebecca Hall, who teamed up with the Black Widow in Vicky Cristina Barcelona), meet, there could have been cliched catfighting. Instead, they are smart people in a crisis who act like smart people in a crisis. Later, even though I was fairly sure she would heroically emerge from the flames, I was a leeeetle worried they had actually fridged Pepper. But nope, she lived to save the day (captured well here).

-Tony's PTSD and panic attacks. These were handled well, without too much comic relief or too much melodrama. You can have panic attacks AND be a superhero AND be funny AND be a genius billionaire playboy philanthropist.

-The little boy. Usually I hate the "little white boy gets to indulge in hero wish-fulfillment because nothing is more important than the egos of little white boys" trope. But thanks to Tony Stark's hatred of sentimentality, this was wickedly funny. The actor, Ty Simpkins, was a cutie without being cloying and had great chemistry with Robert Downey Jr. Good job, kiddo!

-Dale Dickey. Her role, as the grieving mother of a dead soldier, was tiny, but it was good to see her. If you're trying to place her, she beat up Jennifer Lawrence as a methland matriarch in the superb Winter's Bone.

-MIGUEL FERRER!!! I could hardly contain my excitement when Special Agent Albert Rosenfield from Twin Peaks showed up as the vice president (okay, I didn't contain my excitement; I clapped). But Albert would never engage in such deceit! And it seemed a little silly, since the vice-prez's daughter could probably rock a prosthesis without much of a problem. Seriously, I wonder how many actual amputees rolled their eyes at that plot twist?


-Don Cheadle. It was kinda weird when they replaced Terrence Howard with Don Cheadle as Rhodey. They look nothing alike, and while Cheadle's a better actor, Howard looks more classically superhero-y. But it was endearing to see Rhodey running around with his polo shirt and hotel-manager physique, kicking ass. Maybe Katie Holmes and Terrence Howard can get drinks.

-The whole Mandarin thing. The decision to resurrect a racist caricature from comics history rightfully raised some eyebrows. Early on in the movie, using this caricature to make a comment on racism was already an interesting way of handling that. Then when Tony discovers the Mandarin is really just Trevor, a drugged-out, washed-up London stage actor hired by a think tank as a cover for its accidental explosions, it's hilarious. Ben Kingsley was awesome in this dual role. Now that he's "battled" Tom Hiddleston and Sir Ben Kingsley, which Shakespeare-rooted thespian should RDJ take on next? Julia Stiles as the Enchantress? Brian Blessed as Doctor Doom? The entire Royal Shakespeare Company and Oregon Shakespeare Festival as an army of Skrull?


-The writers' refusal to engage in rote throw-away dialogue. With funny spots like the banter between two goons and Tony (was Tony nicknaming one of the goons "Ponytail" an homage to the similarly coiffed and nicknamed goon in Murakami's 1Q84? I can dream, right?) and a hired gun's last-minute admission that he finds the fake cult he's working for really weird, you could tell people were having a good time during this.

-The Science Bros post-credits scene! Having learned by now, the theater remained packed as the credits dragged on. They never did explain why none of Iron Man's new superhero friends showed up to help him*, but hey, at least Bruce was there to lend an ear afterward. Sort of. 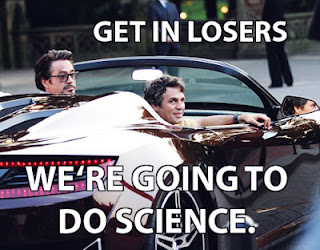