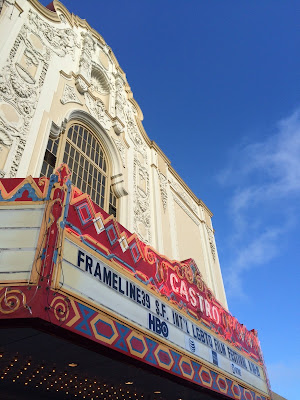 I was fortunate to get two free tickets for this year's Frameline39, the San Francisco International LGBTQ Film Festival. The popular festival features dozens of diverse movies, documentaries, and shorts from all over the world. At last year's festival I watched Out in East Berlin, a documentary with a wide range of viewpoints about being gay in the GDR in the years leading up to the fall of the Berlin Wall. This year I picked two international narrative films: Liz in September from Venezuela and All About E from Australia.

A few years ago, I had a type of thyroid cancer: papillary thyroid carcinoma. This is generally one of the most treatable cancers. The surgeon chops out your thyroid, maybe you get a little radiation thrown in, and you take a pill every morning. But despite how non-lethal my own brush with malignant cells was, post-thyroidectomy I cry uncontrollably at cancer movies. 50/50, The Fault in Our Stars, and now Liz in September are all films that have made me wipe my eyes with my Muni-germ hands.

Liz in September is a Venezuelan film from director Fina Torres. It's based on an American play, Last Summer at Bluefish Cove by Jane Chambers. Liz (Patricia Velasquez) has had an unspecified cancer before, and now it's back and terminal. However, she keeps this diagnosis secret during the beach vacation she's having with friends (an excellent supporting cast) to celebrate her 37th birthday. The tight-knit group is interrupted by Eva (Eloisa Maturén), whose car has broken down. Liz's friends give her the challenge of seducing the apparently straight newcomer, not knowing how vulnerable Eva is: her young son has died, and her husband is having an affair. Still, romance blooms as Liz teaches Eva how to scuba dive and takes her on motorcycle and boat rides. Velasquez gives a subtle, deep performance with pain and humor. Maturén, a former ballerina, is endearing in her first acting role.

I'm not familiar with Chambers's play, but Torres's adaptation is gorgeous and warm. I wanted to be at that beach and at that inn, swimming, reading, and eating fresh fruit. As beautiful as the film is, it was apparently very hard to get made - Torres explained during the Q&A that this "labor of love" was many years in the making, and thanked producer Laura Oramas for saving the production from various last-minute emergencies. Their determination is inspiring for anyone working on their own long-term passion project. 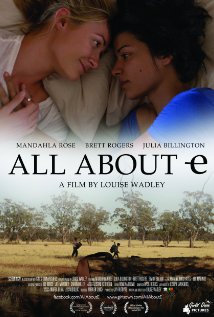 On Monday night I saw All About E, an Australian comedy/drama/romance/thriller from director Louise Wadley. E (Mandahla Rose) is a star DJ who parties hard and womanizes harder. But she's also stuck with her controlling, sleazy boss (Simon Bolton) and is so determined to stay in the closet to her Lebanese immigrant parents that she has her best friend Matt (Brett Rogers) pose as her husband. Perhaps because of these constrictions, when a duffel bag of cash appears she impulsively goes on the run with it, dragging Matt along, and we soon learn that deep down, all she really wants is to play the clarinet and settle down with a farmgirl.

The film felt tonally inconsistent to me, but this might be a quirk of Australian comedic cinema. Although they hold together better as dramedies, Muriel's Wedding and The Adventures of Priscilla, Queen of the Desert, are similarly erratic and were both mentioned by Wadley as inspiration. All About E is a mix of realistic, authentic moments contrasted with sometimes cartoonish characters and actions fueled mainly by plot. I definitely had some questions at the end (What was up with E and her boss? Why do they still have to get in the plane?), but it's an enjoyable ride.

A lot of that enjoyment is due to the leading ladies: Rose and Julia Billington. Although Billington claimed during the Q&A that she's a "city girl," she's totally believable as a tough but heartbroken country girl riding around on a tractor. The chemistry between Rose and Billington is such that you have to root for their characters' romance, even though E is a mess. That E remains sympathetic is thanks to Rose's performance. The beautiful music by Basil Hogios and Joseph Tawadros and cinematography by Justine Kerrigan are also highlights.

Frameline39 continues through this Sunday, June 28. An encore presentation of All About E will screen in Piedmont on Wednesday, and it will screen at Outfest in Los Angeles on July 12. Liz in September will also be screening at Outfest on July 12.

I've now seen George Miller's Mad Max: Fury Road at the theater three times. (The only other movie I've seen three times in theaters is The Dark Knight...is it the brooding heroes and guys painted white?) It keeps getting better - I notice more small details, I feel closer to crying by the end, I can make out more of the Straya slang, etc.

Clearly I'm not alone. Mad Max: Fury Road might not be the biggest moneymaker this summer, but the intelligent, visually stunning, brilliantly edited action film has impressed critics and won the devotion of fans. Comic artists were especially inspired by Charlize Theron's Furiosa. Comic book shops found they, and the printer, had greatly underestimated the demand for the first issue of the tie-in comic. At least one person has made a flamethrower ukulele.

There's been a lot written about this movie, and I'm not going to add my own huge screed. I just wanted to catalog/gush over all my favorite things* about it, because that's really the reason I have this blog. In case it's not obvious, this will be approximately 100% spoilers.

*The Doof Warrior, of course, goes without saying.

Max's failed escape: When Max is captured by Immortan Joe's scavengers, he attempts the daring escape expected of any action hero: he breaks his bonds and fights off an endless supply of anonymous goons while dashing through the evil lair, then jumps to an improbably convenient hanging rope. But instead of completing a nail-biting and exhilarating swing to safety, he's simply pulled back inside the Citadel. Sure, at least one or two of the minions died, but mostly Max's attempt just took five minutes out of everyone's work day. The expectation-defying sequence sets the tone for the film.

Chain fight: The Furiosa versus Max and Nux (who are chained together and not on good terms) fight. I'm always in awe of well choreographed battles, and this one was especially impressive.

Spit fight: Super mature Nux spiting back at Furiosa after she spits at him. Really hope we get some blooper reel of that. (We have been teased about one.)

Whoops: Nux tripping on the war rig. I purposefully avoided reading much about the movie before watching, so I didn't know how large a role Nicholas Hoult's Nux played. When we first see Nux, he's just one of many in the swarm of War Boys. When he straps muzzled "blood bag" Max to the front of his car so he can go into battle while getting a blood transfusion, I expected we'd shortly get a scene of Max avenging the humiliation with a quick kill. When Nux survives being thrown off the rig by the wives (after surviving his own kamikaze attempt), I then assumed he'd be the "thorn in our heroes' side" character. But then he falls down like a total klutz in front of his idol in his moment of glory.


Thumbs-up: Max's grudging thumbs-up when Angharad avoids being crushed by a giant rock. I want Tom Hardy to give me that thumbs-up. I just don't want to fall under a repurposed oil tanker immediately after.

The wives: The women's relationships. The bond between the five wives (Angharad, the Dag, Toast, Cheedo, and Capable) is strong and authentic. They've been through hell together. It's easy to imagine how a lesser filmmaker might have taken a misstep here, thoughtlessly making them either uniformly passive or catty, but this movie doesn't do thoughtless. As Riley Keough (Capable) said about the preparation for the role "“Emailing George about the part, you realized there’s more going on than, ‘Here’s hot girl number one and hot girl number two'".

Subtle smile: Speaking of which, Capable's contemplative, secret smile when she's back in the rig after finding Nux.

Facial: Max taking a split second to weigh "face covered in other guy's blood" with "face cleaned with breastmilk." He goes with the breastmilk. You do what you gotta do, Max.

Boot: Max giving Nux a boot. Nux hasn't uttered a word of complaint about only having one boot, but Max still remembers to grab him one after slaughtering the Bullet Farmer's convoy. How...sweet? (Sure he could have given Nux his actual boot back, but he's not quite there yet - he will later swoop in rather than let Nux suffer while siphoning fuel.) It's a small, wordless indication of how Max is gradually letting himself care for others again. At the beginning of the film, he was so hurt and mistrusting that he was willing to take the rig and abandon the women in the desert, but interacting with Furiosa and the others is bringing him back to his noble self.

Tandem: Max and Furiosa's teamwork. Max is still hoarding weapons, worried Furiosa might try to off him, when he's completely caught off guard by her trusting him to start the rig if her deal in the canyon goes bad. Her trust is rewarded, and they start working together seamlessly.

Uncouth ladies: The blunt Dag's understanding with the blunt Keeper of the Seeds. Age is no barrier to friendship when you're a smartass.

Pa: The characters say almost nothing about the considerable traumas they've all experienced, but we know from the first Mad Max film that Max had a infant son who was murdered. Max's PTSD flashbacks mostly involve a different young child he was unable to save, but when he's watching his new friends leave across the salt he hears, "Come on, Pa!" Wrenching. Whether you knew about his son beforehand or just put it together, it's a punch in the gut.

On the way back to the Citadel, Furiosa slows the rig to a halt. Max looks at her with a wordless question. She silently indicates with her head, and he follows her gaze. There's a giant billboard reading "Aussie Al's OBGYN and Cancer Center (and Waterpark)." Max grunts and looks back at Furiosa. Furiosa looks at Max. Max shrugs deferentially. Furiosa starts the rig again and follows the sign.