Last month I wrote about the first three issues of Kieron Gillen and Jamie McKelvie's Young Avengers. Today Young Avengers #4's out, and Gillen has said it's his favorite (so far). Here's the run-down on this issue in which a hot alien does backflips and defeats monsters while explaining to the reader why he has not had sex with Clint Barton.

Noh-Varr (who is adamantly against his former Marvel Boy title) and Kate escape the Skrull and quickly rescue the rest of the hip young beamslingers, who were about to be off'd by Teddy's fake dead mom. Of course, Noh-Varr's dead parents immediately resurface to join the league of Fake Dead Nagging Parents, whom the Young Avengers try to elude in Central Park. In a talk with Teddy, Loki brings on the passive aggressive bitchery big-time to undermine the former's relationship with Billy, but he does have some good points about the improbability of Teddy and Billy's meeting. Then Loki has an epiphany while complaining about how his birth father wants to eat him, borrows Billy's power, and teleports away. Meanwhile, a horde of zombie parasite people converge on our remaining heroes. The end.

-I'm loving Noh-Varr. What a cutie. Avengers, you don't banish a guy who loves vinyl and is built like that - okay, maybe you banish him to Brooklyn or San Francisco...or Portland...or Austin... Anyway, you done good, Kate.

-Look at Gillen being all clever again with a Family Circus-style map of Noh-Varr's ass-kicking path. Update: I shamefully underestimated McKelvie's input in the planning and structure of this. He gives a great behind-the-scenes look at how this spread came about here.

-I think Gillen has a great handle on the tone. Everything's rapid-fire witticisms and exaggerated young adult culture, but it doesn't come off as overly cloying, at least not to me. Diablo Cody faced "nobody talks like that!" criticism for Juno, but that was never the point (nor was it Wes Anderson's or P.G. Wodehouse's). When Noh-Varr posed dramatically and declared "come with me if you want to be awesome," I chuckled rather than rolled my eyes. The "Yamblr" Tumblr parody at the beginning of each issue annoyed me at first with its smug assurance of adoration, but hey, it's funny and goes well with this world.

-This cleverness also makes it a nice companion to Matt Fraction (Gillen's "Everything Burns" partner) and David Aja's laid-back Hawkeye series, which was just nominated for a few Eisners.

-This storyline is really bringing home the trope that if you're going to be a superhero, your parents have to die. You can get new ones if you want, but the first-round parental figures absolutely need to be dead.

-America Chavez has two jobs: to punch everyone and drag Loki around.

-Shouldn't Loki's All-Language have auto-corrected "loco" to "locas" when describing America's moms, or was that a specific word choice he employed to increase his obnoxiousness? Probably the latter.

-I am 90% sure Loki's "you are a very lovely daydream" line to Teddy was just to get the Yamblr fangirls going.

-What was Loki's revelation? Maybe the parasite didn't know Loki was adopted* and therefore considers Odin his real dad (if he still does), hence Laufey's appearance? And this tells Loki something about the parasite/spell? Hm...

*a.k.a. Odin found a baby on the ground.

Will Loki save the day or retreat to Malibu with a margarita? Will Teddy and Billy's relationship collapse in a storm of tears and whined accusations? Young Avengers 5 is out May 22.

Update: Here are some more images from YA4 along with Kieron Gillen and Jamie McKelvie talking about their work relationship. 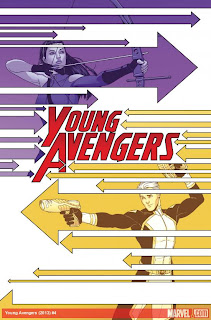 
What do we, as humanity, think Satan is? The embodiment of pure evil? A victim of circumstance? A champion of free thinking? A ridiculous superstition? A metaphor for a necessary component of balance in the universe? With the devil-as-character, writers, musicians, and artists can express their thoughts on these age-old theological/philosophical questions, regardless of religious affiliation.

Part 1: South Park, The Master and Margarita, The Power Puff Girls, "The Devil Went Down to Georgia"
Part 2: God, the Devil, and Bob; The Sandman; The Garden of Earthly Delights; "Sympathy for the Devil"
Part 3 (Beelzebub edition): Paradise Lost, The Sandman, Lord of the Flies, Beelzebub manga/anime
Part 4: "Beelzeboss," The Temptation of Christ, The Divine Comedy, Reaper

The Bible miniseries - The History Channel


So here's a topical entry. A few weeks ago The History Channel's miniseries The Bible got some press when many, including person-type-thing Glen Beck, noted that the actor playing Satan looked a bit like President Obama. And the resemblance is there: the show's Satan looks startling like an older, worn, seen-even-more-shit Obama. The actor is Mohamen Mehdi Ouazanni, a veteran Moroccan actor. The History Channel was quick to deny any intent to make like Fox News and urge comparisons between the Democratic president and the epitome of evil, but not all are convinced. Photos of Ouazanni show that without his The Bible make-up, the resemblance isn't as strong (and that he's rather the silver fox). I have to admit that I haven't watched the show, but in clips of Ouazzani's performance he actually looks more like the Emperor from Star Wars. But still, the photos are uncomfortable, and invite even more uncomfortable questions. Like, was this intentional? And if so, was it to make a statement or to generate tons of publicity? Why is one of the nonwhite actors in the series in the villain role? Et cetera. If we ignore that controversy entirely, the only thing to note here is this miniseries, like Dante and Bosch, chose to go with the "evil expressed by external ugliness" and/or "ugliness as punishment" tropes.


And continuing with racial themes, we again see the light/dark skin contrast in French Symbolist Gustave Moreau's 1882 watercolor, though the difference is a tad more subtle than in Ary Scheffer's ginormus The Temptation of Christ (seen in HMNIS 4). Here you could even argue Satan has the same skin tone as Michael but is just in different lighting, seeing as he's falling into the pit of Hell and all. As per Moreau's style, this work is gauzy and fantastical. Archangel Michael's decked out in gold armor that matches his flowing golden hair, golden halo, and golden wings. Although he usually has his legendary sword, here he has...a stick? A curtain rod? I'm not sure. Once again, we see Satan with bat-like wings in contrast to the angel's feathered ones, but he's pretty normal-looking besides that (no hooves, horns, or red skin). We also see that Satan's crown and triton have fallen symbolically as he is defeated by Michael with a triumphant up-skirt pose.


Martin Scorsese's epic and controversial 1988 film The Last Temptation of Christ is certainly not without racial issues either (Willem Dafoe?), but in this version Satan is actually the whitest white ever in Pollyannaish actress Juliette Caton. This version echos others by giving Lucifer classic (European) beauty that aids in his/her deception. With long blond waves, Satan here actually looks similar to Moreau's Michael above, befitting the fallen angel origin story.

Satan poses as Jesus's guardian angel and calmly explains to him on the cross how God didn't really mean for him to, like, actually die by Roman crucifixion, and that maybe he could just not do that? Having discovered that being crucified sucks, Jesus agrees. He marries all his lady friends and has a ton of kids, but doesn't get a TLC show because this was a time where polygamy and tons of kids didn't warrant that. So, that's pretty much his life, but then when he's old and dying, Harvey Keitel's Judas shows up and gives him a Brooklyn tawkin' to about how he wussed out and points out that his "guardian angel" is actually...SATAN. Having learned nothing from Dr. Evil, Satan fesses up and gloats about it. Jesus has a "I've made a huge mistake" moment and begs God to fix it. Either through God's will or because it was all a dream, he finds himself once again on the cross and is happy about it, having learned that being Jesus means you can't be the 1st century Judea version of a suburban accountant.

Young, gorgeous, impressionable rich boy Dorian Gray is presented with two choices early on in this novel: sweet, sensitive painter Basil Hallward, who is in love with him; or flashy, clever-tongued socialite Lord Henry Wotton. Uh-oh. Unfortunately for Basil, much like with Milton's Lucifer and Eve, it only takes a few alluringly immoral words from Henry to lure Dorian onto the path towards destruction. Henry remains Dorian's tempter throughout the novel, always there to pooh-pooh away any feelings of guilt or reflection, while Basil, with his insistence on stuff like sincerity and kindness, becomes dull to him. When Dorian's fiancee commits suicide, Basil, despite having been heartbroken over the engagement, would offer comfort and introspection. Henry, meanwhile, writes off the incident as something mildly exciting but easily forgotten - and Dorian decides Henry's way is easier.

Dorian is no helpless victim, however. Henry casts no spell on him other than appealing to and nurturing his worst nature. When Dorian commits his worst act - the murder of Basil - it is Dorian's own ultimate rejection of Basil's unconditional love and faith in goodness. In the following chilling scenes where Dorian blackmails a chemist ex-lover into destroying the body for him, it's clear that Dorian's malevolence knows no bounds and is not solely controlled by Henry. Like the worst devils, Henry urges and allows the basest elements of humanity to do his dirty work. But Henry's appeal works not only on Dorian but on the reader as well, voicing many of Wilde's best-known epigrams. One can't help but be delighted by Henry's lines even while knowing his terrible intentions.

The novel, published in 1890, eerily seems to foreshadow the cruelty and egomania of Oscar Wilde's young boyfriend Lord Alfred Douglas in Dorian and Wilde himself in lovelorn martyr Basil. Did Wilde prefer to think Douglas's worst tendencies came from some Henry Wotton? Did he see the parallels at all? Regardless, in the context of devils, I think Lord Henry Wotton would get along infamously with Ray Wise's Satan and Lucifer in the Rolling Stones' "Sympathy for the Devil."