A Biker Gang Version of Shakespeare's Cymbeline is Coming Out? 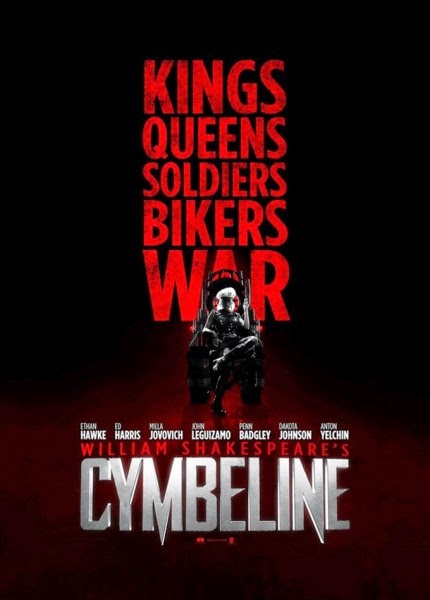 Yesterday I was on IMDB and wondered, for whatever reason, what Anton Yelchin was up to, and was shocked to find there's a movie version of unpopular Shakespeare play Cymbeline coming out! I'm usually pretty on it with these things, so this was exciting and upsetting at the same time. But yes, there's a movie version of Cymbeline, and it's about motorcycle gangs (Shakespeare's play is not about motorcycle gangs).

And it comes out...sometime. It's not terribly clear from the IMDB page what distribution plans are, but it is at least getting shown at the Venice Film Festival in a month or so. Hope you make a splash, Cymbeline! Shakespeare movie adaptations have had a rough time lately. Julie Taymor's 2010 The Tempest flopped (and also kinda sucked, despite having Alan Cumming), Ralph Fiennes's 2011 Coriolanus barely got shown, and apparently a crappy Romeo and Juliet came out last year. At least Josie Rourke's stage production of Coriolanus, buoyed by Tom Hiddleston, was a hit simulcast in theaters around the globe. Maybe that bodes well for Taymor's film of her stage production of A Midsummer Night's Dream?

Anyhoo, back to Cymbeline. Like Winter's Tale and Troilus and Cressida, Cymbeline is no one's favorite Shakespeare play (although the Oregon Shakespeare Festival did a fun production of it last year). Sample conversation about Cymbeline:

Which is why I feel both snarky and intrigued that the trailer for this movie calls it an "undiscovered masterpiece." That's a pretty bold statement (though not necessarily in Shakespeare scholarship, where you have to pretend you "discovered" something new and exciting about Shakespeare a lot), and the premise is certainly bold too: the setting is not the kingdom of Britain but a biker gang. A drug-dealing biker gang. "Like Sons of Anarchy!" the press release begs, while also bringing up Baz Luhrmann's 1996 Romeo + Juliet. Luhrmann made this gritty, flashy aesthetic work for him in that adaptation, so it will be interesting to see how and if director Michael Almereyda pulls this off (he also did a modern Hamlet in 2000). Although there are ridiculous cases of mistaken identity and implausible schemes, there is also a lot of darkness for a biker drama to play up: threats of murder and rape, a beheading, death sentences, etc.

Cymbeline sounds like a girl's name, but it's actually the name of the king. Imogen, his only heir after the long-ago kidnapping of his two sons, secretly marries Posthumus, a noble but not royal orphan who has been raised in the palace. This angers her father and stepmother (especially the stepmother, who who wants her son from a previous marriage, Cloten, to marry Imogen and become king). Posthumus is banished and obviously, since this is a play from early 1600s England, Imogen has to go on a journey disguised as a boy. Spoilers for a 400-year-old play after this!

Main character and pretty great Shakespearean lady Imogen is played by Dakota Johnson, who is about to become famous for 50 Shakes of Grey, which I'm not touching with a ten-foot-whip. Apparently she got the news that she got that part while filming Cymbeline. Milla Jovovich plays her stepmother, who is classically evil, and that could be a really fun role.

Ed Harris plays King Cymbeline. I have no thoughts on this other than that Harris is also in Snowpiercer, which you should check out if you haven't already.

Tom Hiddleston won the 2008 "Best Newcomer" Olivier for his turn as both hero-lite Posthumus and villain-lite Cloten (it's an important plot point that they look similar...especially their thighs), but here Posthumus will be played by Gossip Girl's Penn Badgley and Cloten will be the more dramatically tested Anton Yelchin (to return to the beginning of this long sentence, Yelchin and Hiddleston co-starred in chill vampire family drama Only Lovers Left Alive). TBH, Yelchin is looking pretty damn hot in promo pics. Too bad his character's an inept mama's boy wannabe rapist.


For some reason the casting isn't complete on IMDB. Although I hoped it was John Leguizamo, my guess is that Bill Pullman is Belarius, a nobleman who, when wrongfully banished by Cymbeline, took the dude's kids and high-tailed it with the toddlers to Wales, where he turned out to be a pretty good dad. Spencer Treat Clark, a secondary villain in Joss Whedon's excellent Much Ado About Nothing, will be the elder son and rightful heir of Britain. I'm anxious to see Clark in this role. His acting in Much Ado was very low-key and droll, and this role suggests more range and action.

After finding photos taken of Jovovich and Leguizamo filming together, I think he's probably Cornelius, the doctor/druggist/potion maker (a role which should actually translate well to this version).


Vondie Curtis-Hall (hey, he was in Romeo + Juliet too!) is Caius Lucius, who in the play is the Roman general sent to forcefully obtain tribute from puny colony Britain. From the trailer, it looks like he'll be a cop demanding bribes here.

And Ethan Hawke is Iachimo, the scummy dude who tries to be Iago.

Even if this turns out to be terrible, I obviously will watch it. But I hope it isn't terrible, and kudos to Almereyda for taking a chance on Cymbeline.