Welcome to Night Vale the Novel

Although I like to think I'm not a crazy Welcome to Night Vale fangirl, I have been to four events for the hit spooky-funny-quirky podcast. In January 2014 I attended a panel at Haight-Ashbury's Booksmith and then a live show at the Mission's Victoria Theatre (I wrote about both events here). Earlier this year I caught a second live show at the much bigger Fox Theatre in Oakland. And on 10/29/15, I attended another Booksmith event: the release of Welcome to Night Vale the novel, held at the Castro Theatre.

The book, written by the co-writers of the podcast, Joseph Fink and Jeffrey Cranor, has been rabidly anticipated by legions of fans and debuted at #4 on the New York Times bestsellers list. Having read it...I'm interested in what other fans think, mostly because I wasn't that into it. While I found the book entertaining, I didn't find it strong, deep, or lasting. Characterization and plotting issues took away from the enjoyment for me. Other reviewers, like speculative fiction stars Cory Doctorow and Amal El-Mohtar, have been effusive, so maybe there's something I'm missing. Maybe I'm like Cecil Palmer with Steve Carlsberg's scones. Or maybe I'm just Steve Carlsberg.


It's impossible to not compare the novel to the podcast, for better or worse. Not only are the tone and voice similar, but there are endless references to what's gone on in the fake newscast, and even segments of Cecil's reports. And while this dry, oddball humor often works well in the novel's prose, sometimes it falls short. This is especially true in the aforementioned news reports. Reading the transcripts makes you realize just how how much voice actor Cecil Baldwin brings to the material. Details that might have gotten laughs as asides on the podcast (the many rituals and oddities of the town) clutter up the pages here.

Despite the presence of Cecil's reports, the biggest change from the podcast is the lack of Cecil. His show is incorporated into the narrative, but he's not really present as a character. There are probably fans who are relieved by this, and fans who are deeply disappointed by this. Cecil's romance with scientist Carlos has been one of the most popular parts of the podcast, inspiring swoons and fan art galore, but it has also threatened to overpower the podcast at times, and some worry about the series devolving into pure fanservice. Cecil and Carlos are great, but Night Vale can and does excel even when they aren't in the picture (such as standout episodes "A Story About Them" and "The September Monologues," for example).


Fink and Cranor compromise here: Cecil and Carlos are not the protagonists, but how amazingly in love they are is mentioned about a billion times. It's not clear if this is an earnest attempt to appease fans or a self-parody. Carlos does get a cameo, as do other favorites like Cecil's sweet but hapless brother-in-law Steve, angelically protected Old Woman Josie, and intern-turned-mayor Dana Cardinal.

The main characters in the novel are two women we haven't seen much of before: Diane Crayton, single mom to a fifteen-year-old shape-shifting son, and Jackie Fierro, perpetually nineteen. Diane is unsure how to tell her son, Josh, about his absent father. Jackie doesn't know why she's perpetually nineteen. After a (or rather, the) man in a tan jacket gives them both notes reading "King City" and they both start seeing a blond man around town, their quests converge. 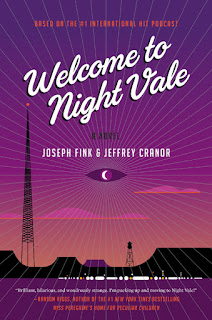 Diane, I felt, was the heart of the story. This wasn't surprising after hearing Jeffrey Cranor speak at the Castro event - he talked about how his own experience of being raised by a divorced mother helped him identify with the character of Diane. While this sort of personal history isn't a requirement, it is possibly why Diane feels so authentic. She's one of the most "normal" people we've seen in Night Vale: a PTA mom in a dull office job. But this normality alone isn't what makes her relatable - that comes from the specificity and depth Cranor gives her (although a collaboration, Cranor worked more on the "Diane" sections). The way she agonizes over what to write in a text, her mixed feelings about her secluded spot in the office, and her anxiety over meeting a colleague outside of work make her not just a stock "soccer mom," but a real woman we care about.

We get nearly none of that with Jackie. Her backstory is intriguing and typically Night Valean: a girl who has been nineteen for decades, watching her former classmates grow up and grow old. She can't remember her childhood or how she started working at the pawn shop she returns to everyday. But all we get of her character are a few signifiers. For example, she says "man" and "dude" a lot. Sometimes she's a retiring homebody and sometimes she acts in a way that seems intended to make the reader say, "What a badass." While plenty of people are sometimes homebodies and sometimes badasses, her personality shifts seem to have more to do with the needs of the plot than with her own complexity or growth. So much of how the plot progresses has to do with the bond Jackie and Diane develop, but that bond felt forced and artificial to me.

Fink spoke of being drawn to Jackie much like Cranor was drawn to Diane, but it's hard to say what he sees in her and wants to show us. This is especially frustrating when you consider the many characters of the podcast who became dear to listeners with just a handful of well chosen words. Why weren't the writers able to do in a novel what they can do in a few sentences? Would a voice actor have been able to bring to Jackie what Fink and Cranor couldn't? Maybe those listening to the audio book read by Baldwin will have a different impression. 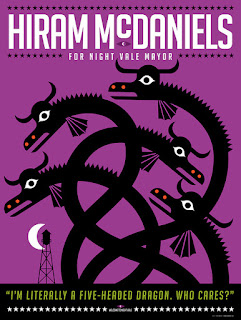 Beyond the characterization issues, the plotting falls apart a bit at the end. Our protagonists finally get to King City, and there are some haunting and unsettling descriptions of the town, but we don't get much of a satisfying conclusion at our destination. The explanation for the ubiquitous "King City" notes was almost definitely thought of after the fact. We finally meet Troy, Josh's (and Jackie's) father, but we don't learn much about him, and why one of his children was thought to be needed by the city is unclear. Why is Jackie stuck at nineteen? Is it because of who her father is or just a Night Vale thing? These questions are answered with a shrug, but it's a shrug that feels unearned.

My biggest disappointment was the revelation of the identity of the man in the tan jacket. The mysterious character with his deerskin suitcase full of flies has haunted Night Vale since episode 14 in 2013, and he always seemed to be a part of one of the secrets behind the scenes, possibly with ties to former mayor Pamela Winchell. It turns out he's the mayor of King City but was forgotten because of Troy for some reason and needs to spend more time with his family? You deserved better, Evan Eric Elliott man in the tan jacket!