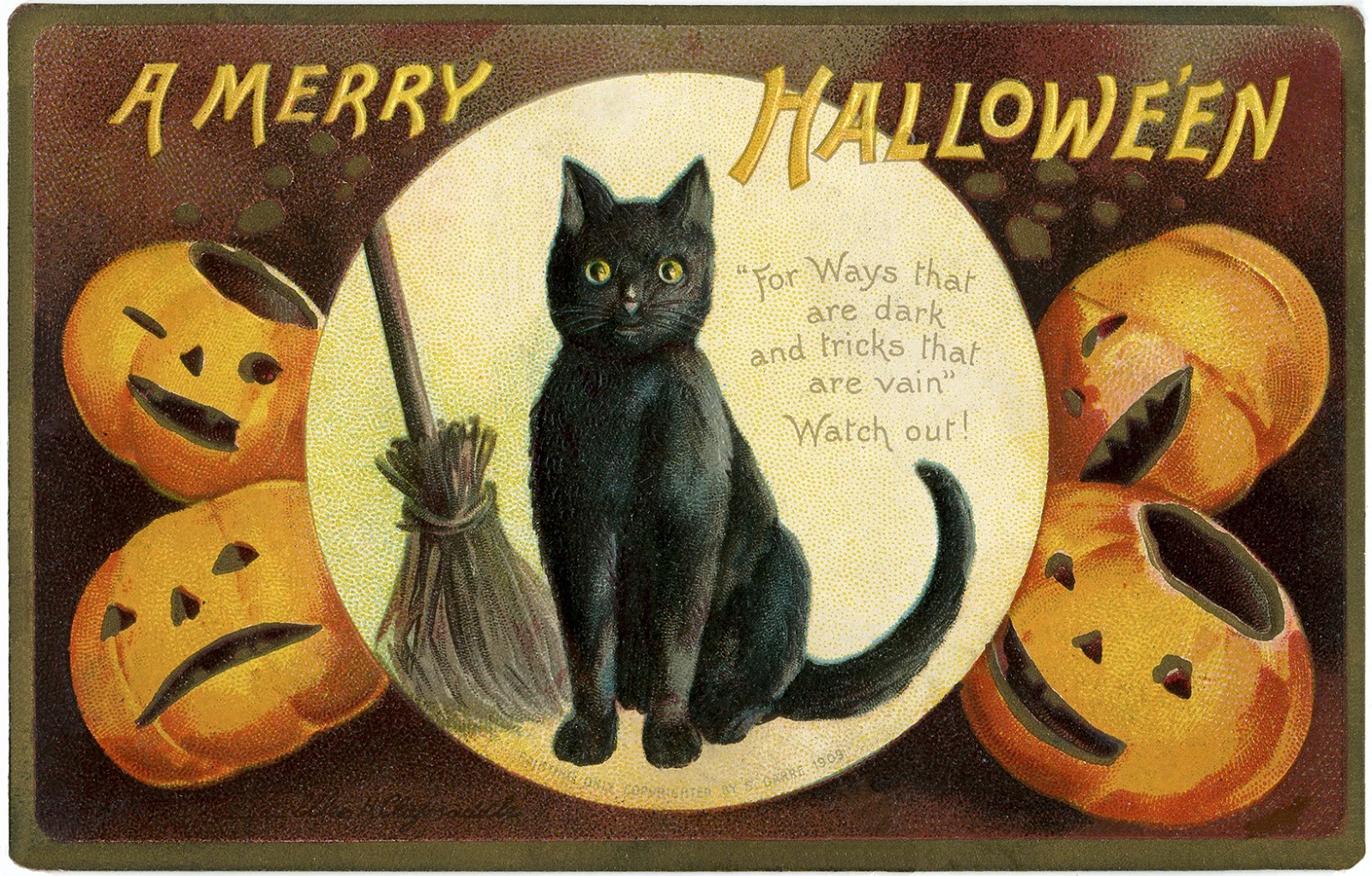 A few years ago I did a post on black cats for Friday the 13th, which looked at kitties from art and literature. With their traditional connection to bad luck and the fact that they're not as "flashy" as other kittens, it's always a little more nerve-racking than usual giving a black foster kitten back to the shelter for adoption. Since it's the month of black cats appearing in decorations (often with witches), here are some more stellar examples of that much maligned, Halloweeny animal.


18-year-old Bear is the subject of owner Tom Cox's many books about being a crazy cat man, but he's become so widely known because of cat's best friend: the internet. Photos of the melancholic Bear and the reasons for his sorrow are paired on his hit Why My Cat Is Sad twitter account, which currently has 172k followers. His persistently heartbroken little face just demands you pick him up for a hug and kiss. Fortunately, despite having a rough history, Bear is adored by his family. And understandably, Cox is a black cat advocate.

My cat is sad because life has given him many, many lemons & he cannot use them to make lemonade because he is a cat. pic.twitter.com/PhAVk905EI
— WHY MY CAT IS SAD (@MYSADCAT) September 17, 2014


Batman sometimes-villain, sometimes-hero Catwoman is the undisputed queen of the felines. Fans of the classic, stylish Batman: the Animated Series might remember Isis, a sleek black cat who matched Catwoman's sleek black cat costume. Selina Kyle has been portrayed as having different "main" cats over the years (Hecate, for example, in the 1966 Batman movie, aka the best movie of all time), but Isis from the various animated shows is the definitive one for me.


Half of popular YouTube cat duo Sho Ko, fluffy, cuddly, energetic kitty Shorty is also an advocate for black cats everywhere. (Except when sidelined by her addiction to catnip bananas.)

Like Shorty, Cole is the older half of a YouTube kitty pair (Cole & Marmalade). And like Shorty's owner, Cole's owner has a soft spot for black cats. Good news for this formerly tiny rescue!


Like Isis, here's another black cat the intersection of comics and television - and a witch's black cat at that. Salem, the cat of Archie Comics' teenage witch Sabrina, was once a sorcerer who tried to take over the world. His punishment? Being turned into a cat. And then sharing a bed with a teenage girl. Salem reached top popularity on the 90s sitcom, Sabrina, the Teenage Witch, where he was voiced by Nick Bakay and portrayed by both real cats and a terrifying robot cat. Since then he's starred in Sabrina, the Animated Series, made an appearance in gritty smash hit Afterlife with Archie, and has even gotten his own origin comic about his adventures before living the Humbert Humbert dream.