Shelley Gets Her Due in Dance: Frankenstein the Ballet


As someone who's been a little obsessive about Mary Shelley's Frankenstein, I was ecstatic when San Francisco Ballet announced last year that they would be staging Liam Scarlett's new ballet Frankenstein, which promo pics indicated would be close to the novel, in 2017. On Halloween, I scored a $45 orchestra ticket in a special sale and guarded it as if it held the secret to life. But in the final weeks before the North American premiere, I wasn't the only one shivering with antici...pation. I've never seen this much excitement about a ballet. Co-workers, my roommate's classmates, acquaintances on twitter: everyone wanted to see Frankenstein. I finally got to see the ballet on 2/18/17, and it did not disappoint.

The biggest draw for me was that unlike the many movie versions, Scarlett's ballet is deeply rooted in its source novel. The lack of an adaptation loyal to Shelley's work is why I ended up planning my dream cast, and this ballet is probably the closest fulfillment I'll get. There are no Igors; castle laboratories; or green, bolt-necked behemoths here. Instead, even with the changes needed for three acts of dance, we get Shelley's novel. We get the stories of Victor Frankenstein, a university student who messes up big time; of his loving family and friends, whom he loses; and of the tortured life he recklessly brings into the world.

Although its world premiere was less than a year ago, Frankenstein feels like an established classic. It's worth noting that Liam Scarlett is only 30. With young choreographers like him and Justin Peck, ballet's future looks bright.

I looked at casting as soon as it was available, but I accidentally looked at the matinee, the casting for which were principals Aaron Robison as Victor, Dores Andre as Elizabeth, and Luke Ingham as the Creature. When I checked again before leaving on Saturday night, I realized my mistake, and saw the cast would be Max Cauthorn, Lauren Strongin, and Taras Domitro. "Who is Max Cauthorn?" I wondered. He's a corps member - and a young one at that, being just a few years out of San Francisco Ballet School. He's also the only non-principal in the role. Likewise, Lauren Strongin, a soloist, is the only non-principal Elizabeth. (Both are also Bay Area natives. High-five!)

While disappointed that I wouldn't get to see Dores Andre again after she was such a standout in Program 1, I looked forward to seeing Strongin and Cauthorn, who are possibly under consideration for promotion [update: Max Cauthorn was promoted to soloist on 3/13/17]. It's great to see home-grown former SF Ballet School students, like soloist Wei Wang, who was an apprentice the year before Cauthorn was, rise in the ranks. And (this is where I clarify that while a ballet fan, I am not a ballet expert) I really enjoyed Cauthorn's and Strongin's performances. They were lovely and youthful together, and their early effortlessness together made the emotional impact of Victor's later distraction and avoidance all the stronger.

Meanwhile Taras Domitro, in a scarred, nude bodysuit as the Creature, brought maturity and depth to his coltish, heartbreaking, menacing character. His pas de deux with Strongin, as his terrified would-be stepmother, and then with Cauthorn, as the immature father who regrets him, are both standouts. (Domitro isn't tall, but he's like 80% muscle, and Cauthorn seemed to have zero problems tossing him around like he was a willowy ballerina.)

Other things I loved:

-Henry Clerval! Although there was one huge Henry-related problem (see below), I was thrilled that happy, doomed puppy-dog Henry made the cut in this adaptation. Soloist Angelo Greco played Henry Saturday night, and brought lots of sweetness to the role.

-Justine Moritz! One element of Shelley's novel that Scarlett kept but altered was that Frankenstein family maid Justine Moritz's mother hates her. In the novel, Justine's mother is just part of her backstory, but in the ballet she's present as the housekeeper. Even though Victor and Elizabeth see Justine (soloist Julia Rowe) as a friend, Madame Moritz (soloist Jennifer Stahl) coldly and relentlessly keeps her daughter in her place as a servant.

Scarlett's reason for this subplot becomes clear at the end of Act II, when Madame Moritz's desperation, regret, and seconds-too-late arrival to Justine's execution add an absolute gut-punch. Characters danced by Stahl, who was promoted to soloist after her starring role in 2013's Rite of Spring, just have bad luck with executions.

-Talented kids: there are a few SF Ballet School students in this production, but the child dancer with the most time on stage last night was Jonathan Yee as Victor's little brother William. It's a demanding role for a kid, with lots of acting, a duet with the Creature, and a fair amount of time playing dead, and little Jonathan did great. Good job, Jonathan!

-Here is the biggest problem the ballet had: Henry Clerval's costuming. The opening scenes establish Victor as wearing a red coat. He wears a red coat in childhood. He wears a red coat as a teenager. So when Act I, scene 3 starts at the university, and we see a guy with Victor's same wig wearing a red coat, it's obviously Victor, right? Wrong! It's Henry. When Victor arrives with his red notebook, everything becomes clear, but I was confused at first, and from what I overheard at intermission, a lot of people were.

Then in Act II, Henry is wearing a green coat. I will admit to owning more than one color of coat, but I'm not in a ballet where people in the balcony need to quickly recognize me. Since other characters' clothes stay similar throughout, why not just have him wear a green coat in Act I so we can easily distinguish him from Victor and the other neutral-wearing students? But the worst is yet to come. In Act III, he's wearing another, different red coat. You're killing me, costume designer John Macfarlane!

-Henry and Victor: also, I wish Victor and Henry's friendship had been better established in Act I. I feel that would have been a better use of scene 4, rather than the "college students gonna college student" episode in the tavern. Scarlett has Victor and Henry meet as freshmen rather than as children, but they barely interact before Victor's breakdown lands him back at home, at which point Henry is living with them and practically part of the family. 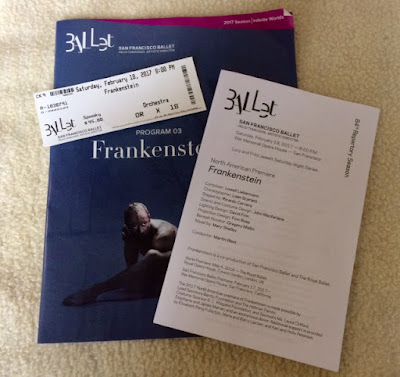