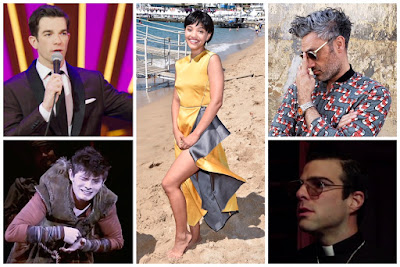 I'm still on my Notre-Dame de Paris kick. I have been for years, but still am, too. How much time did I put into this Dream Cast? Way too much!

Like I stated for Wuthering Heights and Frankenstein, this Hunchback of Notre Dame/Notre-Dame de Paris dream production is definitely a miniseries, not a movie. It would be an accurate reflection of Victor Hugo's novel, and would therefore have a LOT of stuff, so two hours isn't going to work.

Most importantly: it has Jehan Frollo du Moulin! 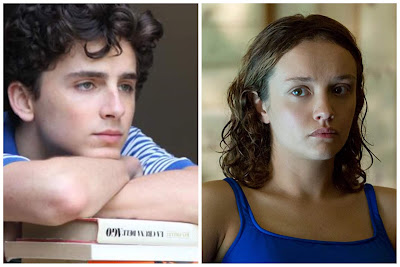 Before Claude Frollo and Paquette "Chantefleurie" Guybertaut become hateful, preternaturally aged 36-year-olds, they're happy young single parents in wildly opposite social positions. Claude Frollo, an intensely focused and extraordinarily gifted student in Paris, ends up finding new meaning in life when he adopts his baby brother Jehan after their parents die of the plague. Meanwhile in nearby Reims, Chantefleurie, worn down by poverty and prostitution, is thrilled when she gives birth to a baby girl she names Agnes. Everything's great, cue "Dear Theodosia."

But the unthinkable strikes when baby Agnes is kidnapped and a deformed toddler left in her place. Chantefleurie's anguish is only compounded when she is erroneously told (due to 15th Century forensics) that the Gypsies responsible cooked and ate her baby. Chantefleurie's and Frollo's fates converge for the first time when he ends up adopting - on a Quasimodo Sunday - the toddler left in place of Agnes.

It helps that Chalamet is French and waifish, but what really sells him to me for young Claude is his excellence in subtly showing an active interior life. Frollo is quiet and reserved, but always thinking. Cooke, an expressive standout in Thoroughbreds, could bring Chantefleurie's elation and heartbreak to life. 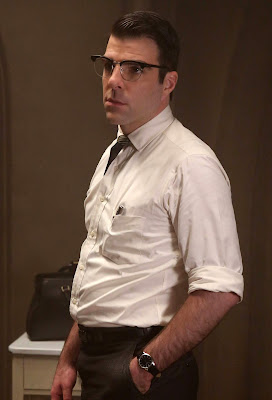 Sixteen years later, Frollo isn't doing so great. Having literally run out of human knowledge to acquire, he has turned his studies to the dark arts and alchemy, and those pursuits are driving him insane. The public thinks he and Quasimodo are demons. Jehan has turned out to be an asshole. He has a sexual awakening, but isn't allowed to have sex. Furthermore, the printing press is growing in popularity, and he worries what effect this will have on architectural trends. 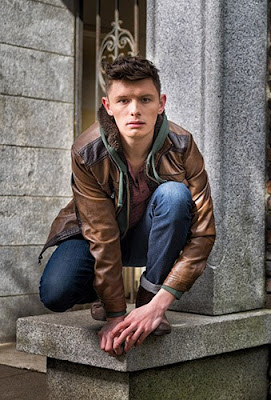 Part of Quasimodo's identity that is often overlooked in adaptations is that he is deaf. His beloved bells of Notre-Dame have taken away his hearing (though he can still make out the largest bell). He and Frollo develop their own sign language, but Quasimodo remains mostly isolated from society. Broadway actor Joshua Castille, who has profound hearing loss, recently performed the part of Quasimodo in the Disney musical at Seattle's 5th Avenue Theatre using American Sign Language with a singer/interpreter. Videos of Castille performing are online (he's also been on Switched at Birth), and he's an expressive and engaging actor.

Of course, for physicality, Castille isn't quite there for what this role traditionally is. Quasimodo is supposed to be lumbering and unnaturally strong, able to toss people across the room when they annoy him. He could pose a serious threat, and even though the people mock him, they're afraid of him. Castille could maybe throw...a kitten? There's certainly no way we're going to believe he can pick up his foster brother Jehan by the feet and slam him so hard against the walls of Notre-Dame that his brain comes out (he can just push him, I guess). Also, Quasimodo is supposed to be ugly and Castille...is very much not. But that's what prosthetics and makeup are for! 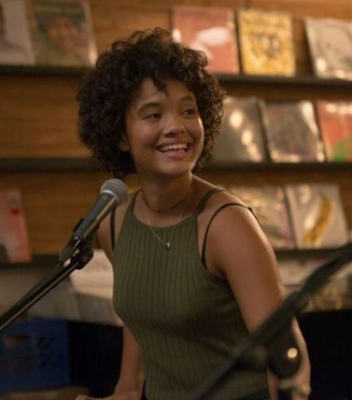 Race and Esmeralda is complicated and thorny. Adaptations generally cut out the Chantefleurie story, where Esmeralda is identified as Agnes from Reims, which is about 45 minutes away from Paris by train. Although she doesn't seem to actually be what we today call Roma (her father is not identified other than that he's a criminal), she "passes" with her black hair and tan skin, which is compared to those of people from Andalusia and Egypt. For adaptations that have to pare down runtime and/or want to avoid a problematic "Gypsy kidnappers" plot, it's easier to just say she's Roma and leave out the origin story.

I don't want to do that, but I would stick with a woman of color in this role. My pick would be radiant Kiersey Clemons. I saw her recently in cute, family-friendly indie Hearts Beat Loud. The role allows Clemons to show off her acting and musical chops, both of which are stellar.

With her buoyancy and singing voice, I'd love to see her as Esmeralda. In Hugo's novel, Esmeralda is street-smart and will totes pull a knife on you, but is also, heartbreakingly, a typical teenager. She wants to sing, dance, obsess over her crush, and do magic tricks with her pet goat. The idea of her as "sexy Gypsy temptress" is something the men around her project on her. Clemons could definitely show Esmeralda's vitality, charm, and tragedy. 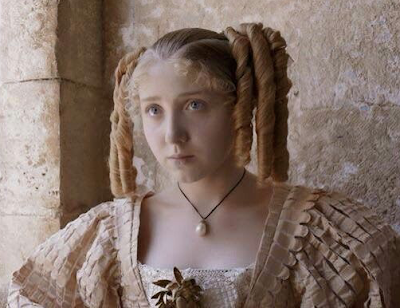 Fleur-de-Lys isn't an altogether sympathetic character. She's a noblewoman, Phoebus's fiancee, and jealous of Esmeralda. She makes fun of Esmeralda's clothes and does what she can to keep her and Phoebus apart. However, her feelings are understandable. Although born rich, as a woman, she's also born without any power of her own. She has no say in being given in marriage to a philandering douche, and she's trying to exercise as much damage control as she can.

I recently watched Tale of Tales, and was captivated by Bebe Cave, who plays Violet, a princess forced into marriage with a literal ogre. Cave's expressiveness and adaptability made her believable and endearing as naive princess, "final girl" victim, and rightful ruler. A lesser director and actor might have have portrayed Violet as a spoiled mean girl at the beginning of her story, but Matteo Garrone and Cave avoided that misogynistic cliche. Cave is the actress I'd want to explore and express Fleur-de-Lys's unenviable position. In Hugo's novel, Clopin is not the leader of the Gypsies, but the King of Thunes (beggars, vagabonds, criminals, etc). He rules the underworld gathered at the Court of Miracles as part of a triumvirate with the Duke of Egypt and Bohemia (Gypsies) and the Emperor of Galilee (Jews). Clopin is charismatic and "fun," but also a bit of a psychopath. He's more than ready to hang Gringoire (after toying with him) for the crime of accidentally wandering into the Court of Miracles. During the showdown between the underworld, the cops, and Quasimodo (the underworld mistakenly thinks Quasimodo is holding Esmeralda captive in Notre-Dame, and storms the cathedral), Clopin dies, but not before hacking off a bunch of limbs with a scythe.

Magnetic Taika Waititi would be a scene-stealer in this mercurial role. 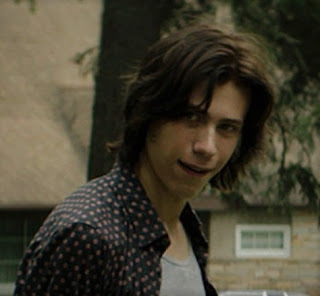 Nineteen-year-old Owen Teague is best known for playing bully Patrick Hockstetter in 2017's It. In a departure from the novel and the 1990 miniseries, 2017 Patrick gets to be attractive and rock a killer 80s wardrobe. He dies quickly, but Teague's charisma makes an impact.

Sixteen-year-old Jehan is less sadistic than Patrick, but still a bully and major problem child. He mocks classmates, mooches money from brother/guardian Frollo, gets drunk, and visits prostitutes. Despite this, he's popular and hangs out with everyone from Phoebus to Clopin.

He can be a leader when he feels like it, organizing student raids on wine shops and fighting at the front of the underworld's attempt to free Esmeralda from Notre-Dame. His real aim there is revenge against both Claude, who has cut him off financially, and his hated foster brother Quasimodo. Unfortunately for Jehan, it doesn't go well, but he does go out in true Jehan fashion by singing defiantly in his final moments. I'd cast Teague and his sardonic grin as teen rebel Jehan. 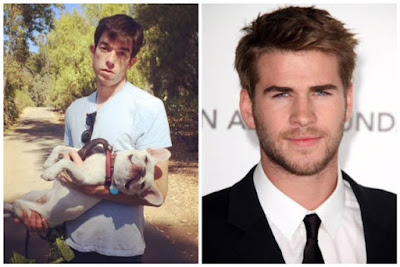 To be honest, I was pretty "meh" about casting either of these characters until I thought of John Mulaney as Gringoire. Then I was all for it!

Gringoire (loosely based on an actual historic figure) is an impoverished, up-and-coming poet and playwright for whom almost nothing goes right. The novel starts with his play about to be performed, but it gets held up for reasons behold his control, resulting in a furious crowd. When the production finally starts, the crowd's interest is quickly diverted by Clopin and his Flemish diplomat/hosier friend. Afterwards, he accidentally ends up in the Court of Miracles and is almost executed by Clopin. Esmeralda saves him by marrying him, but they don't have sex because she's not DTF. From then on, Gringoire has to perform in the Gypsies' acrobatic shows, balancing chairs on his head and whatnot.

The one thing that goes right for him: through his "marriage" with Esmeralda, he meets and falls in love with her little white goat, Djali. In the chaos and bloodshed of the ending, the two of them manage to escape. If you say you don't want to see John Mulaney heroically fleeing a scene of violence with a goat clutched in his arms, you are lying.

As for Phoebus, meh. All you need for Phoebus is a good-looking, halfway decent actor who can savor being a hot dick. Liam Hemsworth would be fine. 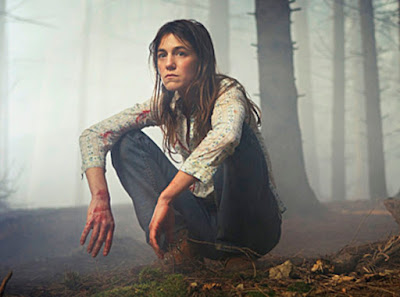 After being told her baby was killed and cannibalized, Chantefleurie leaves Reims and becomes Sister Gudule: an anchoress living in a tiny, cold, barren cell in a public square in Paris. There she mourns her daughter and screams abuse at Gypsies (including, ironically, Esmeralda). When she and Esmeralda finally figure out they're mother and daughter thanks to matching baby shoes, their joy is short-lived. Esmeralda is arrested, and Gudule dies defending her.

It's a small role, but pretty much at 11 the whole time, and Gainsbourg would knock it out of the park. 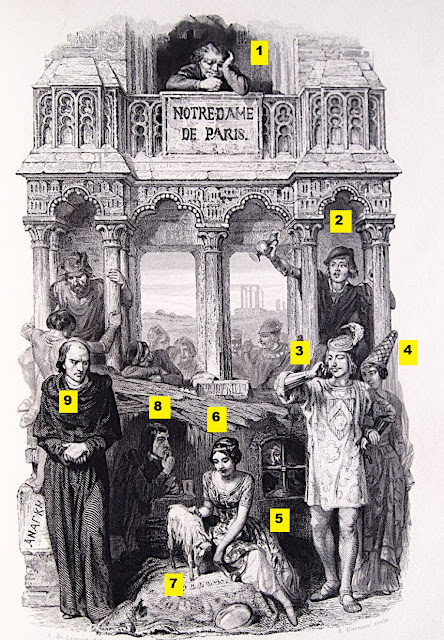 Header image:
Zachary Quinto as a priest (I knew someone had to have put him in a collar sometime, and google Images delivered): this 2010 Funny or Die sketch.
Kiersey Clemons in Cannes: photo by George Pimentel
Joshua Castille: from the 5th Avenue Theatre production
John Mulaney: from John Mulaney: Kid Gorgeous at Radio City
Taika Waititi: his twitter