Movies I Want Right Now That I Can't Have Right Now


There are a number of movies coming up that I'm impatient to see. Some will be out in a few weeks, some in nearly a year, but they all feel like they're taking forever to get here. Here are the movies I'm most mad I can't see yet, in order of release date.


I jump when my toast pops up, so this movie will probably terrify me. But that's okay, because it's Tom Hiddleston. And, as the trailer has promised, he takes off his clothes (I'm a lot more understanding of stuff like Sports Illustrated's swimsuit annual now that so many movies cater to the female gaze). Hiddleston teams up with his onscreen sister-in-law from Only Lovers Left Alive, Mia Wasikowska, general phenom Jessica Chastain, and the guy who said "MAKO" a lot in Pacific Rim in this Guillermo del Toro haunted house movie. With a great cast, great director, and lush Gothic visuals, I'm sure the nightmares will be worth it.

Bonus Upcoming Hiddleston: Loki and the Scarlet Witch will pair up to do Southern accents in I Saw the Light, AND he's also starring in High-Rise.

Using the teaser trailer because of the cover of Nick Cave's "Red Right Hand." Nick Cave is always a plus.


The "princess locked in a tower" trope is ancient. And while it features in countless fairy tales and video games, it's rooted in the very real fear that if you're a woman, some asshole might kidnap you and imprison you somewhere in order to rape you repeatedly. The Cleveland and Jaycee Dugard cases are just two of the biggest headline-makers of the past few years. These horrors have been reflected in contemporary culture in various ways, including Netflix's Unbreakable Kimmy Schmidt, which creates bright humor out of darkness. Room, by Emma Donoghue, is a thoughtful wonder of a novel. Embracing the challenge of writing a non-cloying child narrator, Donoghue tells the story of two survivors: a young woman who was kidnapped and the son she births and raises in captivity.

I'm sharing the teaser trailer here because the full trailer is kind of an all-over-the-place mess. I hope the movie itself does the book justice.


If you're Michael Fassbender or Marion Cotillard and also married to either Marion Cotillard or Michael Fassbender, I'm not sure why you would strive for anything else; you have reached peak achievement. Just chill in that French-Irish sea of beauty. But the Macbeths refuse to chill when it comes to the possibility of ruling Scotland in the 1040s, even though it's not like crowns are going to get them indoor plumbing or anything else remotely good. I'm really excited for this. After the disaster of last year's Cymbeline, we need (or at least I want, because I'm greedy) a big, successful Shakespeare adaptation to follow the promise of 2014's blockbuster broadcast of Coriolanus (more Tom, no apologies) and the near-perfect 2013 Much Ado About Nothing. I'm pissed that we're getting this two months after the UK does, in December instead of October. Are they sending an actual reel of the film by dinghy? Maybe they're hoping the Christmas spirit will make Americans more likely to see Shakespeare, even if it's the play containing the famous lines:

Life's but a walking shadow, a poor playerThat struts and frets his hour upon the stageAnd then is heard no more: it is a taleTold by an idiot, full of sound and fury,Signifying nothing.

God bless us, every one!


I think all DC fans are on pins and needles for these next two. Like most of the internet, I found the Batman vs Superman marketing pretty laughable (So grimdark! Ben Affleck? What's with the title - is the Kent family farm in a class action against Wayne Enterprises?), but I'm including the above screenshot because that's the exact moment I gained some faith in Batfleck. Seeing him run through Superman-caused destruction to save a small child and then glare at the sky convinced me that this Bruce Wayne is pissed off and motivated enough to really take on the Man of Steel.


The "DC = grimdark" fears were further fanned by San Diego Comic Con footage of Suicide Squad set to morose music, but hopefully David Ayer's film has some actual fun in it. I mean, it is about an off-the-books supervillain task force whose members have names like Captain Boomerang and Killer Croc. But it's likely that a good portion of Suicide Squad's success will depend, fairly or not, on its two most popular characters: Harley Quinn and the Joker. Margot Robbie seems perfect for Harley (this is the character's first live-action appearance), although it's weird that someone born in 1990 will be in a romantic triangle with Jordan Catalano and the Fresh Prince of Bel-Air. There's been a lot of drama regarding both Robbie's and Jared Leto's characters' design (though mostly Leto's), and to be fair, it's pretty easy to imagine Robbie Quinn and Joker Leto re-enacting this scene, though obviously Batman would never let anyone choke to death on their own vomit.

What the dynamic between them will be also has a lot of fans anxious. Interpretations of the relationship can range from "supervillains in love" to "Harley is the poster child for domestic violence." Their relationship origin story has been told various ways in the canon, but I prefer it when Harley's transformation to supervillain Harley Quinn is done by her own initiative. Is a good decision? No, but it's hers. The Adam Glass version in the "new 52" Suicide Squad comics, the most probable source material for the film, is my least favorite. Not only does Harley not have a say in becoming Harley Quinn, she wasn't even deviously planning on a trashy tell-all true-crime book while treating the Joker - her boss was. She does kill her boss and free the Joker when she finds out, but it's done in a sort of fugue state. Weak.

So I've gone on for two paragraphs while barely mentioning any of the other characters/actors, which I feel is going to be pretty typical for this movie. Sorry, guys! Viola Davis will likely be fantastic as boss lady Amanda Waller. Will Smith has the right former-military-precision/soulful-interior look for Deadshot. I'm also looking forward to seeing Catholic gangster supervillain El Diablo (Jay Hernandez) and stereotypical Aussie supervillain Captain Boomerang (Jai Courtney), whom I call Sargent Australia in my head.

Sidenote: I love that we now have a real-life DC villain marriage with Jada Pinkett Smith and Will Smith.

Here's the trailer, which was first seen as leaked SDCC footage. How do you do have a Bee Gees song in a Suicide Squad trailer without it being "Stayin' Alive"???


I was totally prepared to hate Jerome. The premise of Gotham is/was "Gotham before Batman," with Bruce Wayne as a recently orphaned tween and Jim Gordon as a rookie cop. Seeing a city steadily decay and burn over the years to the point where a high-tech vigilante dressed as a bat seems like a reasonable solution sounds like a great prequel.

But either the writers or the studio or both could not help themselves, and tons of established Batman characters have been crammed into the show already, despite Bruce Wayne being a child at this point. I was hoping they could at least refrain from blowing their Joker load, but near the end of Season 1 came the extremely unsubtle teasers that the mythology's #1 scene-stealer since Batman #1 would be appearing.


I didn't like the lack of restraint; I didn't like the cloying campaign; and I didn't like that assuming this is Joker and not an obnoxious bait-and-switch, he has a known background (he's not a John Doe, his name is Jerome, and he grew up in future-Robin's grandpa's circus being forced to listen to clown sex).

But alas, Cameron Monaghan won me over with a virtuoso performance of a monologue delivered in the presence of Inara from Firefly and Uncle Hector from Breaking Bad. I'm not an actor, but my advice to young actors would be that when performing a monologue for an audition, definitely do it while flanked by Inara and Uncle Hector. Maybe Kaylee and Skinny Pete in a pinch.

Anyways, like the 1960s Batman series, Gotham's best assets have been good actors having the time of their lives as flamboyant villains (RIP Jada Pinkett Smith's Fish Mooney), and previews of Season 2 (premieres Sept. 21) suggest we'll be getting a lot of Monaghan's Jerome, who appears to be high on the "I'm not a carny anymore" life. Joker-fashion focus has been on Jared Leto's version, but Monaghan, finally out of that blue sweater, is also getting a lot of fabulous costumes. What do they mean? Let's speculate. 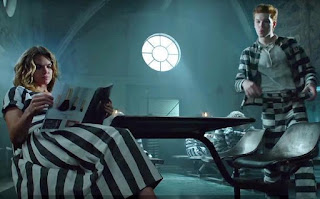 This screenshot is from this clip, where Jerome and Barbara do some flirting in Arkham Asylum. Barbara is clearly the fashion standout here thanks to her clever re-purposing of the traditional convict stripes to form a cute summery dress, which is apparently allowed, but Jerome's not looking bad either, showing off his undershirt in a Stanley Kowalski move. This isn't a dynamic we've seen before, and I'm looking forward to seeing how it plays out (and how and if Barbara ends up back with Jim to produce Batgirl). If she's not the one, Jerome, don't worry: Arkham remains a great place to meet your significant other. 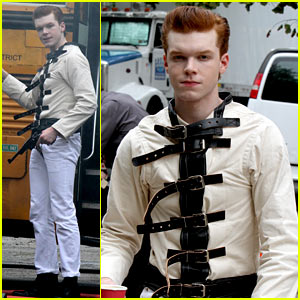 These pics from Just Jared show Jerome in what seems to be the world's most fashionable and least effective straitjacket. It looks great, but there do not seem to be any arm restraints, which I think is the only point of a straitjacket? To be fair, arm restraints would make it harder to hijack that bus and thus pay homage to The Dark Knight and One Flew Over the Cuckoo's Nest.

Rampant speculation: Jerome's clearly Arkham's problem child from Day 1. Here he incites rebellion when the questionable asylum rents the inmates out as backup dancers for a Lady Gaga video. 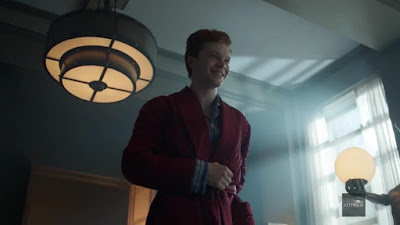 Why is Jerome dressed like Hugh Hefner? It looks like he's out of Arkham at this point, unless Arkham is holding some sort of inmate smoking jacket competition, maybe as an attempt to make amends for the Lady Gaga incident.

Rampant speculation: Ok, this is actually interesting. In the clip showing the above scene, Jerome appears to be coached by Season 2 newcomer Theo Galavan, who some think might actually be Ra's Al Ghul. This still doesn't explain the Hefnerwear, but oh well. 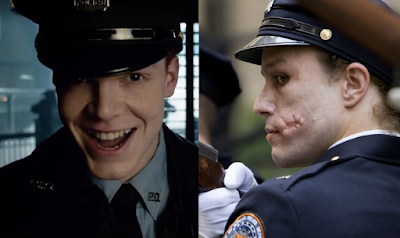 Jerome is already causing havoc in stolen uniforms, seemingly another nod to the Joker's actions in The Dark Knight. Does Gotham realize at this point just how much of the city's annual budget will be dedicated to dealing with this guy?

Rampant speculation: At the end of the season, Jerome goes good and becomes an upstanding GCPD officer. He is such a great cop that Batman is never needed.