CATS ON THE INTERNET!

I am sick today, and when I haven't been sleeping or extracting mucus from my nasal cavities, I've been dicking around on the internet. Most of this browsing has been related to cats, because cats are most of the internet. And also because I am a crazy cat person at heart who can't have a cat in her current apartment. So I decided to write about the very best cats on the internet. Maybe later I'll write about cats such as the many that frequent Haruki Murakami novels or Behemoth in The Master and Margarita, but that's too much thinking for now.

Of course box-loving Maru is number one. Duh. He is obviously the best. He is a roly-poly, saucer-eyed Scottish fold (sans folds) who lives in Japan, spends the days playing with his mommy, and has gotten book and DVD deals. But he's not just a normal cat playing. This cat is expressive, lively...inventive, even. Whenever I'm visiting my mom's cats my mom, I make sure to remind our two kitties how lazy and nonprofitable they have been. Oh, you can bat a catnip toy, Kitten? Woop-de-frickin-doo. Maru will dress himself in his cardboard turtle shell and strut around like a champ. Whether you're reading his charming blog or perusing his Youtube channel, Maru is a joy. A lucrative joy.

Next is exotic shorthair Meme, her mama Goma, and Scottish fold "uncle" Fuku. While their blog is not translated into English like Maru's, you can run it through Google translate, and it comes out...like Finnegans Wake? I really don't know if this is the author's writing style, or if Google's just having a hard time with kanji. Anyways, like Maru, these kitties reside in Japan and have reached worldwide fame, but seem to have better merchandising. Step it up, Maru! The unfortunately acronym'd  FGM trio owes its fame to the birth of Meme, a muppet-kitten so adorable, it was hard to believe she was real.

Time to travel from Meme's Tokyo to New York, where Winston lives with his brother Rudy and their two daddies. Winston differs a great deal from the other kitties on this list in one respect: he's not the sole focus of owner Rich Juzwiak's career. No doubt Winston videos and photos bring lots of people to Juzwiak's blog, but Juzwiak is an apt and well known pop-culture critic, scowly meatloaf-shaped kitty or no. But despite being pretty dumb and mostly interested in food (you'll never see Winston creating games with the sheer abandon of Maru), Winston gives Juzwiak a lot to write about. Like Meme and Goma, Winston is an exotic shorthair, a breed created to be appealing to the internet and not breathe, but unlike them, he was a sickly rescue kitty (which, as Juzwiak explains, can come from the over-breeding of cats like exotics and Persians) nursed back to ungratefulness.

And now, onto my newest kitty obsession I discovered via Jezebel yesterday. Luna the Fashion Kitty. She wears insanely girly, frilly, garish outfits and her tongue is always sticking out. She does tricks. She splits her time between Mexico and the American Southwest. She is amazing. I cannot believe I am this enthused over a gender-performing Persian cat, but I am too enthralled to care.

Does Eponine Have to Cut Someone? 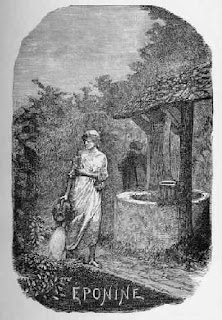 Les Miz fans are probably well aware of the Tom Hooper (The King's Speech) movie musical that's happening. The cast still isn't completely finalized, so rumors abound. However, it's looking pretty final that Taylor Swift will be Eponine. I am not the only one annoyed by this by a long shot (I like Best Week Ever's Michelle Collins's take-down here).

Generally, Taylor Swift doesn't bother me much. I find the "I hate Taylor Swift because she is the virgin in the virgin/whore dichotomy and I think women classified as whores are way superior because I have completely missed the divide-and-conquer tactics of the patriarchy" people more irritating. She just feels so, so, so wrong for the role. She's squeaky clean with little-to-no acting background. Eponine, even in her more romanticized Broadway form, is still ragged and streetwise. Look, she's a career criminal who is going to dress up like a dude and run through a damn battle zone for the guy she loves, not write her fifteenth song about how he's dating someone who's not her as a single tear runs down her bisque porcelain cheek. Actually, Swift would be perfect for pretty and not-quite-bursting-with-personality Cosette, who will most likely be played by Amanda Seyfried. And here's the thing: I'd be really excited if Amanda Seyfried were Eponine! Seyfried we know can act, and has a good range at that. It seems so obvious just to switch these two actresses.

I'd love an Eponine that gets back to the non-fluffy roots. She's one of my favorite Victor Hugo characters. When my mom took me to the musical after I finished Les Miserables, I worried she would be cut completely (if you've read the gargantuan novel, you know why this might be a concern), and was thrilled when she was a major part. She's an interesting character, especially in the book. Wry, clever, a little crazy, very tough. After being presented as spoiled and domineering as a young child earlier in the novel, she adapts when her family's fortunes turn. A valuable member of her father's criminal gang, and assumed to be headed for common-law marriage with fashionable criminal Montparnasse, Eponine still hopes for something more with Marius, even though she's starkly realist. Her speech to Marius on which "On My Own" is based is disturbing and touching, revealing an intelligent if damaged girl who has soldiered on.

At least they didn't cast Nick Jonas as Marius. Yes, Nick Jonas has played Marius on stage. He actually kinda works for book-Marius, because book-Marius is a young douche. But you gotta love this awkward version of "A Little Fall of Rain," where he can barely bring himself to touch talented Samantha Barks's Eponine. Kyle did it better with the Mole in South Park: Bigger, Longer, & Uncut. I know it's a concert version, but come on, Michael Ball and Lea Solonga had great chemistry (and shared a mic) in their 10th Anniversary concert.

That's how you do it.

As for the rest of the cast, the only disappointment I have is that the original rumor was that Geoffrey Rush would be Thenardier, and I would have loved to see him take this role opposite Helena Bonham Carter's Madame Thenardier. However, it looks like the role has gone to Sasha Baron Cohen, whose ability to do over-the-top buffoonery with a hint of malice makes him a good choice as well. Honestly, I can't wait for Bellatrix and Borat to steal the show as Paris's worst parents (not mentioned in the musical, but Gavroche is just one of their several kids they decided they couldn't afford).

Hugh Jackman and Russell Crowe having a manly man-off as Valjean and Javert should be fun, although the racially ambiguous Javert could have lent some diversity to the production. Anne Hathaway as Fantine is fine. At least she probably won't sing "he thlept a thummer by my thide," like the otherwise great Daphne Rubin-Vega. Regardless, I know I, and tons of other fans, will definitely see this. And who knows? Maybe Swift will surprise.
at 11:48 AM No comments:

Hedgehog in the Fog

A hedgehog gets lost in the fog on his way to visit a friend. That's the simple premise of this 1975 film by Russian animator Yuriy Norshteyn (Yuri Norstein), based on a children's story by Sergei Kozlov. However, not all is simple, either on the surface or below, in this little work of surprising, haunting beauty and darkness.

And there is darkness there. There's the physical darkness of the night and its dangerous creatures such as owls and bats (and man), and an emotional darkness as well. Or perhaps darkness is too strong a word. There's a sort of pensive quietness, a fog. There's Hedgehog's resignation to his fate in the river; his decision not to seek help from Bear Cub, who worriedly calls for him; the sense at the end that although Hedgehog is now safe, he is forever changed; that lingering image of the horse in the fog (an image I've found hard to shake, and one that has shown up in my writing).

This isn't to say this is a despairing story - far from it. Enthralled by the beauty of the fog and the horse, Hedgehog takes a risk, goes on a journey, is helped by kind souls (the dog and fish), and winds up safe in the familiar company of his friend. The journey has been frightening at times, but he's also experienced something important. The film is also charming and quirky. Little Hedgehog is adorable, his response to the owl's threatening antics is unexpected, and Bear Cub is caring and blustery.

The look of the piece adds a lot of its power. We can see the darkness, see the fog, see the faint glimmering of the fish below the water's surface. With striking images such as the swirling, falling leaves and the ghostly, surreal glimpse of an elephant, it's hard to imagine this story having the same effect in classic cartoon form. And Norshteyn's work looks so different because it is so different. His method, which is infamously meticulous and time consuming (his nickname is the "Golden Snail"), involves a series of glass panels that can be moved in relation to each other. He has spent years working on minutes of his project "The Overcoat."

The music, composed by Mikhail Meyerovich, is also an important element. I got to see Norshteyn speak a few years ago at the Balboa Theater in San Francisco (I was one of the few under-60s, one of the few non-Russians there), and he was accompanied by Gojogo, a band for whom Norshteyn has been an inspiration. At the event there were screenings of several of his works (including 20 minutes of what is completed of "The Overcoat") and Gojogo provided their own scores. As beautiful as their music is, it felt odd to watch "Hedgehog in the Fog" with different music. Nostalgia no doubt plays a part (for the animations I hadn't seen before, Gojogo's music sounded perfect), but the original goes together so well - visually, emotionally, musically.