I finally saw Django Unchained this weekend. I am glad to report that at the showing I went to (at the 4-Star Theatre in San Francisco), there was no inappropriate laughter at the dynamite scene like Cord Jefferson encountered. There is a lot of dark, violent humor in this movie that got lots of laughs, but that scene wasn't it, and rightfully so.

By turns hilarious and heartbreaking, Django Unchained gets right down to business in the opening. Dr. King Schultz, in his ridiculous traveling dentist wagon pulled by his horse Fritz, meets two slavers and their latest "purchases." He is determined to speak to a slave called Django. Soon the slavers are dead and Django is off with Schultz, a bounty hunter who needs his help finding a trio of white plantation workers. As the two men get to know each other, Django reveals his plans to free his wife from slavery, and Schultz decides to help him.

Christoph Waltz's dentist-turned-bounty-hunter Dr. Schultz is an interesting character. He's fine with shooting down a man in front of his young son, but fairly naive to the horrors of slavery. I thought it was interesting that after his star-making turn in his last Quentin Tarantino film as a Nazi, in this film his desire to help Django rescue his wife from slavery is rooted in his German identity: here is a Siegfried on a quest to save Brunhilde from the dragon, and he must assist.

As Django, Jamie Foxx makes a glorious hero/anti-hero. His loyalty to his wife is absolute, and his tenderness for her is revealed in his daydreams. He is understandably wary at first in his new "free" world, but you can always sense that confidence and cunning in the background, just waiting for the right moment. And boy, does that moment arrive.


Broomhilda was the role that everyone was worried about, and well... Kerry Washington is great, but we learn very little about her character. We either see her as Django's mirage (in a gorgeous yellow silk empire-waist dress, naked in a lake, etc.) or being tortured (whipped, branded, locked naked in a hot box). I wrote way back in May about Kara Walker's artwork and the then-forthcoming Django Unchained. Now that the movie's out, I think Broomhilda's depiction was not as bad as it could have been and not as good as it could have been.

Broomhilda is tortured like Walker's female figures, but we learn little of her psyche. I get that she's the "princess on the mountain," but that's the age-old cop-out, and telling us more about her would have helped, not hurt, the story. Really, all they needed was a flashback scene showing her in non-mirage, non-tortured form. There are already multiple flashback scenes, and one with Broomhilda and Django in happier (relatively) times could have given us some insight into who Broomhilda is and what their marriage is. That said, Washington brought anguish, strength, and the blush of love to the role, and her expressive face helps make up for her lack of lines.

Speaking of Walker, the one scene that brought her work most to my mind was when Django, in his ridiculous Blue Boy get-up, walks past slave women languidly rocking on swings on his way to kill two men who assaulted him and Broomhilda and who are about to whip another slave. The scene captures the juxtaposition between the natural beauty of the South, the formality of the clothes, and the absolute hideousness of the social system. (BTW, here is an interview with the film's costume designer, Sharen Davis. I hope she finally gets that Oscar!)

And that social system is hideous, and presented in all its dysfunction in the Candie household: depraved, deluded Calvin Candie, who justifies his treatment of slaves with phrenology and admires Alexandre Dumas (whom he doesn't know was the grandson of a black slave); Bligh-like chief of staff Stephen, who proves his loyalty to co-dependent Candie with his harsh treatment of fellow slaves; Lara Lee, Candie's Southern belle sister who surveys and partakes in the inhumanity around her with ladylike giggles; Sheba, a slave who is also Candie's dressed-to-the-nines mistress; Cora, Lara Lee's experienced maid; and Moguy, a groveling yes-man pretty much raised from birth to be Candie's lawyer.

The plantation is a structure built to support and benefit Candie, and everyone else exists at his whim. Some fare terribly, like slave D'Artagnan, murdered by dogs, and Broomhilda, used to sexually "reward" slaves and guests alike. Some simply exist in their relatively-privileged-but-not-powerful status quo, like the lowest-level white workers. Stephen, meanwhile, has positioned himself as the Iago of a Richard III. He's quick to object to any questioning of Candie's authority, yet is an expert at communicating "you listen to me, boy" to him without saying anything as overt as "you listen to me, boy." But his "power" has come at an awful price, and even he could be disposed of by his Calvin in an instant.

As with Broomhilda, we could have learned more, even via tidbits, about Sheba and Cora. We learned more about Moguy than about them. The most we get from Cora is the none-too-plaintive tone of her voice when Django tells her to say goodbye to Lara Lee. Sheba's confidence in her standing with Calvin contrasted with Stephen telling her to help with the coffee after Calvin's funeral adds intrigue and suggests how precarious her position is.

After the first shoot-out in Candieland's Big House, I was really pissed at and disappointed in Schultz. All you had to do was shake Leo's hand and y'all would have been out of there safe and sound! The Caddy was waiting for you! But no, Dr. Schultz has to be all, "Nope, no way I'm leaving here without shooting this representation of the Antebellum South's rich white male privilege!" Because of his actions, he dies and Django and Broomhilda suffer more. But, by the end of the movie, I saw why it had to happen. Django Unchained isn't a realistic drama about a man and woman being freed from slavery within the nation's then-laws. Django and Schultz can't work within the system they despise. When Django violently levels the plantation, it's just as much about symbolically destroying the institution of slavery as it is revenge against individuals.

-Dr. Schultz's coat. I had lusted after this coat long ago with production stills, and as soon as Christoph Waltz showed up I fell in love all over again. I love this coat. According to the above linked interview with Sharen Davis, it is an "Inverness cape coat." 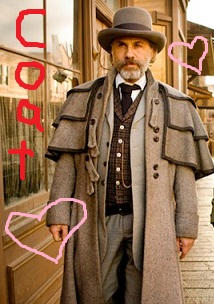 -The bouncing tooth. OMG. Why was it important that Schultz was previously a dentist? I don't know (if it's so he can be "Dr. King," then ew), but I loved the tooth.

-As a former horseback rider, I kept hoping they'd explain how Django, who was supposedly not allowed to ride before, is able to get on a horse and go. But, considering Django's also an immediate straight-shooter and weapons expert, you've just gotta take it with a grain of salt. By the time he hops on a bridleless palomino and rides off confidently on a rescue mission, it's clear the movie has just decided he's a badass who can do what he wants at this point. And Foxx totally sells it with his determination. If he has to ride horses and be an expert shot to save Broomhilda, that's what he's going to do.

-The Ku Klux Klan scene. I had seen this scene compared to Blazing Saddles beforehand, and it didn't disappoint. It is a hilarious kick to the balls of The Birth of a Nation. Sidenote: most hilarious (unintentionally) scene from The Birth of a Nation: when the heroine finds out her fiance is in the KKK because she takes his laundry from him and his frickin' KKK hood falls out. Awkward!

-Django, when you're finally reunited with your wife with the news that you've come to rescue her, catch her when she faints. Jeez.

-With all the violence, the scene that was most wrenching to me was when Moguy prepares Broomhilda's bill of sale as the harp is played. A young woman's fate - either to live with her husband in freedom or be sentenced to a life of rape and abuse - is resolved over some paperwork she has no say in.

-I thought Candie's bullet-through-the-flower death would have been a lot more powerful if we hadn't seen a very similar bullet-through-a-Bible-page death earlier.

-Quentin Tarantino's cameo was distracting. Was this the role Sacha Baron Cohen dropped out of at the last moment, so maybe Tarantino was like, "Fine, I'll just do it myself!"?

-I was happy to see Broomhilda riding Schultz's horse Fritz at the end. Glad Django didn't forget about Fritz!