The Hunchback Musicals: A Rambling Yet Incomplete Comparison

As a Notre-Dame de Paris/The Hunchback of Notre Dame superfan (there are dozens of us!), I was thrilled to finally get to see the updated Disney stage musical last week when it was put on by South Bay Musical Theatre. The community theater troupe pulled the show off with aplomb, mostly because of the cast's powerful voices - especially Jen Maggio as Esmeralda and Jay Steele as Frollo (Steele also had multiple roles behind the scenes, including graphic design and assistant master carpenter). The audience I sat in was dazzled, and shows sold out. Full disclosure: Christine Ormseth, who is a member of my childhood church, did the hair and makeup design and was in the ensemble.

If you're not right on the pulse of the musical and/or Victor Hugo fan communities, you might ask what the updated Disney stage musical is. Remember the 1996 Disney movie The Hunchback of Notre Dame, which had almost nothing to do with Hugo's novel? If you don't, it had Frollo as a judge (instead of a priest, to pacify the Catholic church) who ended up taking in baby Quasimodo after he straight-up murdered Quasimodo's mother (rather than adopting Quasimodo to save him from Parisians who wanted to burn the ugly child to death); talking gargoyles (including one with saggy boobs); and most shocking of all, a happy ending.

If you do remember it, it's probably due to two tour de force Alan Menken and Stephen Schwartz songs: "God Help the Outcasts" (sung by Heidi Mollenhauer) and incel classic "Hellfire" (sung by Tony Jay). Indeed, these songs belted out by Maggio and Steele were highlights of the South Bay Musical Theatre production.

Disney first did a stage play of Hunchback in 1999 - in Berlin, in German. This version was similar to the movie, but had Esmeralda die. Then in 2014, a new version with a book by Peter Parnell premiered that was even closer to the novel. That doesn't mean, however, that there weren't some big changes...one of which was completely whackadoo.

When I opened my program, I was shocked (and delighted!) to see Jehan's name in the first song. Jehan Frollo, Claude Frollo's rebellious teen brother, probably gets chopped from adaptations more than Fleur-de-Lys (Phoebus's fiancee - more on that later), and at least she gets a starring role in the French Notre-Dame de Paris musical (more on that later as well). Jehan gets nothing!

I always think this is a shame, because I kind of love Jehan. Yes, he's an asshole that I'd hate in real life, and at sixteen he's already a drunk mooch who has instigated his fellow students to carry out raids on wine shops, but he's also sassy, charismatic, and a good source of comic relief in a dark book. He's the first character we meet by name, and we meet him when he's hanging out on a column and heckling people during the interminable wait for a play to begin.

I gathered from the fact that he was only in one song in the program that he was possibly going to be killed off before his time, but I never would have predicted that The Hunchback of Notre Dame musical would make him...Quasimodo's father!

This is surprising and hilarious for two reasons:

I'm guessing most people watching the musical didn't care that they made a character they had never heard of Quasimodo's dad, but I care. However, I don't disapprove. Mostly because it's hilarious for the above reasons (Jehan would be so mad and then make a great joke about it), but also because I get what they were going for by having Jehan and a Gypsy be Quasimodo's parents: correcting the way-off-base explanation for Frollo adopting Quasimodo, linking Quasimodo and Jehan in Frollo's mind (in the novel, Frollo decides to raise Quasimodo in honor of fellow orphan Jehan), keeping the movie's conceit that Frollo wants Quasimodo hidden, and explaining Frollo's bigotry towards Gypsies.


The Jehan inclusion highlights how much stuff is in Hugo's novel, and how adaptations have to pick and choose what to keep or cut. Do you try to work in how Frollo's madness is linked to alchemy and the dark arts? What about the whole part with Esmeralda's mother, a prostitute who is erroneously told that Gypsies ate her baby? There's a plethora of characters, subplots, and themes to choose from, so not surprisingly, another musical based on the same source is much different from this one.

Notre-Dame de Paris is a 1998 French musical (available on DVD!) by composer Riccardo Cocciante and lyricist Luc Plamondon and is basically the Gallic Phantom of the Opera. Despite not bothering with Jehan, the show is hugely popular in French-speaking countries, and its original cast will never be fully freed from the expectation of reunion concerts.

As an excuse for me rambling some more, here are some other big differences between the two musicals. From here on out, the Disney/Menken musical The Hunchback of Notre Dame will be abbreviated as HoND, and the French musical Notre-Dame de Paris will be NDdP.

Something HoND carries over from the Disney movie is having Frollo keep Quasimodo hidden from public view and forbidding him to leave the cathedral. For the musical, this is a major plot point, encapsulated in the sweeping Out There. Will Quasimodo disobey Frollo and go out to the city on his own? How will he fare in the alien world outside the walls of Notre-Dame?

In the novel, this imprisonment simply isn't a thing. For one, novel Frollo lacks the social awareness to care what people think about him and his charge, and he actually has Quasimodo in the public eye way more than the public would like (when Frollo and Quasimodo go out on walks everyone talks behind their backs like they're Belle in Beauty and the Beast, except the Parisians think they're literally demonic instead of just weird).

Although disobeying an increasingly evil Frollo is still a major personal struggle for Quasimodo, he's otherwise no shrinking violet in the book; if someone makes fun of him, he picks them up and throws them. Problem solved! We don't get to see Quasimodo throw anyone in NDdP, but neither is he locked up like Rapunzel.

The fact that Quasimodo is mostly deaf due to his lifelong love of giant bells has sometimes been left out of adaptations, but this is starting to be rectified. Not only does HoND acknowledge this by making him hard of hearing, but a current production at 5th Avenue Theatre in Seattle has cast Deaf actor Joshua Castille as Quasimodo. Castille uses American Sign Language in the play, which makes sense - in the novel, Quasimodo and Frollo converse with their own sign language. For Quasimodo's songs in the musical, one of his imaginary/statue friends (played by EJ Cardona) acts as his singing voice. (Update 6/16: here's a clip of Castille and Cardona at work.)

The biggest change Disney made in their movie was having Esmeralda live and have a happy ending with good guy Phoebus. In HoND, even though Esmeralda dies, Phoebus still gets a hero role. He's a soldier with PTSD who learns to buck the system to stand up for what's right. This is in stark contrast to the novel, where he is a total fuckboy.

Novel Phoebus is engaged to aristocratic Fleur-de-Lys, but he screws around and parties a lot. (Jehan is one of his drinking buddies!) He has zero interest in anything more than sex with Esmeralda. When he gets stabbed by Frollo while trying to have that sex, he decides the affair isn't worth it and bails.

Although NDdP humanizes him a bit, it still keeps him deep in fuckboy territory and even gives him a fuckboy anthem, in which he explains at length to his fiancee why it is totally not his fault that he ended up in a hotel room with a different woman, who is now condemned to death.

The only characters you really need for a Notre-Dame de Paris adaptation are Quasimodo, Esmeralda, and Frollo. An adaptation with only those three main characters would be quite minimalist, while using all of Hugo's characters would be difficult to juggle: there's a goat, there's Esmeralda's mom who lives in a hole, there's a whole subplot with Louis XI, there's a very funny Flemish hose-maker, etc. Neither HoND or NDdP risk putting a live goat onstage, but they do both use other supporting characters who don't always make the cut.

While I have to give HoND credit for the sheer ballsiness of their Jehan stunt from which I have still not recovered, and they include a quick Louis XI appearance, NDdP takes the gateau here. First of all, they put historical writer cameo Pierre Gringoire to work by having him narrate (they also make him way cooler than novel Gringoire, who is a hapless dork).

More importantly, the NdDP writers give voice to Fleur-de-Lys. Instead of giving Phoebus's fiancee the "bitch" treatment, they let her be human. The NDdP Fleur-de-Lys is giddy with love for Phoebus, but she's also very young and nervous about sex. Even in what could be seen as a villain moment - her song demanding Esmeralda be hanged - what really comes through in Julie Zenatti's masterful performance is her character's anguish and immaturity.

Here's the big one! And...I'm not picking sides. Sort of. This one truly is a matter of taste. For HoND, you've got Menken's score made even more haunting and grand with a choir, repeatedly calling the epic cathedral itself to mind. Then you have the aforementioned "God Help the Outcasts" and "Hellfire," both unusually mature and complex for Disney songs. There are a slew of covers of these, including this badass metal Hellfire.

And in its corner, NDdP has "Belle," in which Quasimodo, Frollo, and Phoebus talk about how much they want to bone Esmeralda. It's hard to overstate this song's popularity in the francophone world. It came on the radio when my sister and I were in a restaurant in Bruges a year ago, which was awesome. It is to Garou, Daniel Lavoie, and Patrick Fiori what "Let it Go" is to Idina Menzel or "On My Own" is to Lea Salonga. There are endless videos of them singing it in concerts and fundraisers, but this one is typical: the audience loses its shit every time one of the guys come on, and the guys gaze adoringly/awkwardly at each other.

This isn't to say "Belle" is NDdP's only great song. The whole soundtrack is worthwhile, and I will say that its song about the place of ill repute Phoebus and Esmeralda plan to hook up in is way better than HoND's version. (Probably goes without saying, but unlike the French musical, the Disney staging does not include simulated sex.)


Anyway, to sum up: I am a crazy person and please watch a musical based on Victor Hugo's 1831 novel.

By the way, now might be an exciting time to join the Hunchback fandom. Idris Elba is producing, directing, and starring as Quasimodo (???) in a modern-day Netflix version, which is possibly also a musical? But Elba's not alone. Josh Brolin also wants to play Quasimodo, as does Tom Hollander. Is Quasimodo the new "it" role, like Hamlet or the Joker? Will any of these productions include Jehan? If so, The Hunchblog will probably have the news first.

In the meantime, here is a bonus character guide: 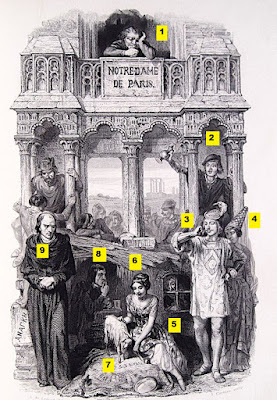