Review - Professor Moriarty: the Hound of the D'Urbervilles 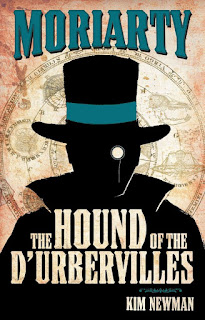 I've found this whole "novel-length fanfiction of public domain works swarming bookstores" a little trying. Not because I have anything against fanfiction, our modern populist pulp (indeed, I long for the day when someone makes two straight male characters I've written have sex, because then I'll know I've made it), but because there's something just so eye-rollingly trite and opportunistic about Mr. Darcy novels written for bookclubs.

Fortunately, Kim Newman's 2011 novel, Professor Moriarty: the Hound of the D'Urbervilles, is not like that. Intensely researched and deliciously witty, The Hound of the D'Urbervilles takes Sir Arthur Conan Doyle's mirror image of Sherlock Holmes and Dr. Watson - master criminals Professor James Moriarty and Colonel Sebastian Moran - and makes them the stars, with right-hand-man Moran narrating. While Holmes and Watson lived together on Baker Street and were served tea by Mrs. Hudson, in Newman's world, Moriarty and Moran are flatmates on Conduit Street and are waited on by Mrs. Halifax, who runs the brothel downstairs. Like Holmes, Moriarty is quite asexual, however, and his interactions with the prostitutes are mostly limited to lending the resident dominatrix his professorial accessories and asking them to care for his beloved pet wasps while he's out.

As Tumblrific as that sounds, Newman keeps very much with what we see of the pair in Doyle's very limited showcasing of them, and doesn't make them young, hot, and in love (although there sure ain't anything wrong with that). Moriarty is Doyle's elderly math teacher. Moran is Doyle's adventurous but over-the-hill hunter.


The different adventures in the book each parallel one of Doyle's famous detective stories. There's the titular story, obviously, and also a blackmail case involving New Jersey opera singer/adventuress Irene Adler and her sexy photos titled "A Shambles in Belgravia." It's obvious these were written separately, but that works perfectly for mirroring the episodic Sherlock Holmes saga. Perhaps my favorite story here is the unabashedly ridiculous and oddly charming "The Red Planet League," in which Moriarty seeks revenge on his most hated enemy ever: Sir Nevil Airey Stent, a rival mathematician who has ridiculed Moriarty's academic work! The plot involves Mars and vampire squid, and somehow Newman holds it all together.

I was very impressed with this "holding together" skill of Newman's. There are endless references to other famous works in the mystery genre and British literature, humorous asides, and inside jokes that build and build upon themselves, yet never does he lose Moran's voice. Moran's the epitome of myopic Victorian Empire hubris, and he makes for an entertaining narrator.

You can be entertained for quite a while, too. A surprisingly hefty volume, The Hound of the D'Urbervilles had me laughing over a number of Muni bus rides and made two flights in between San Francisco International and Charles de Gaulle Airports much less painful.

My only complaint was that a certain aspect of the ending felt rushed and unresolved. Of course, Doyle's ending to the franchise was why furious Victorian readers bullied him into writing more, so perhaps that should be a kudos instead to Newman.