Tusk: It Is What It Is 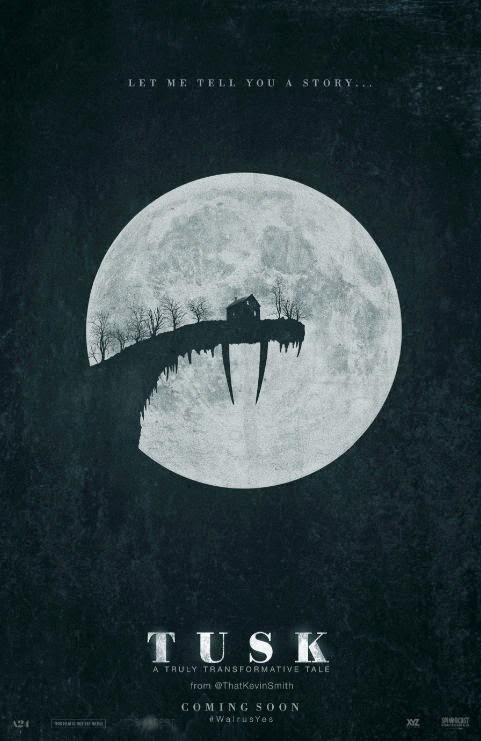 In the Roberto Bolaño short story "The Colonel's Son,"* the narrator describes to the reader a late-night, low-budget zombie movie he has just seen. The movie in question is "a bad film, or the sort we call bad," but he still finds it "revolutionary." He can't really explain why. He says that the film was, "pathetic really, full of cliches and tired devices, prejudices and stereotypes, and yet at the same time, every frame was infused with and gave off a revolutionary atmosphere, or rather an atmosphere in which you could sense the revolution, not in its totality, but a fragment...as if you were watching Jurassic Park, except the dinosaurs never showed, no, I mean as if it was Jurassic Park and no one even mentioned the fucking reptiles, but their presence was inescapable and unbearably oppressive."

I don't think Tusk is revolutionary or infused with revolution. And there are other odd genre films I've watched in the past twelve months that I've liked more but haven't written about (Only Lovers Left Alive, Under the Skin, Snowpiercer). If I hadn't been reminded so strongly of Bolaño's story while watching it, I probably wouldn't have written about Tusk, either. But like Bolaño's narrator, I kept sensing...something. The best I can articulate it is to say it is what it is. Is it a great film? No. But despite the fact that it was basically a dare that came from a joke and is purposely trying to be a movie like "The Colonel's Son" but without the lack of a budget, it is still sincere. It's hard to say what I would change about it. Another artsy horror movie I recently watched, We Are What We Are, by contrast, is so gorgeously shot and acted that the flaws drive you (or at least me) crazy. "You almost had it!" I wanted to scream at We Are What We Are's stupid-ass ending. Tusk also had an ending that makes zero sense, and yet it fits. It all fits together, even the parts that don't fit, into one curio that could rest on a mantel in the villain's creepy, intriguing mansion.

Among the other parts that don't fit but do fit are a Quebecois caricature of a detective (played by Johnny Depp, whom I did not recognize), lengthy character monologues (a Kevin Smith standard), and a romance between gorgeous Genesis Rodriguez's Ally and pale, schlubby Haley Joel Osment's Teddy (another Kevin Smith standard, although to be fair, this is a picture of him and his wife of fifteen years). But even though I don't entirely disagree with the review Johnny Depp Ruins Kevin Smith's Tusk, I don't feel compelled to edit that character out of the film. It's a misstep, but it's a weird misstep in a weird film. Rodriguez is moving in her to-the-camera mid-film confession. And the affair between her and Osment's characters manages to feel sweet.

The main character, Wallace, is played by Justin Long. Long is most known for a series of Apple commercials in which his obnoxiousness and John Hodgman's affability somehow made behemoth corporation Microsoft a lovable underdog. Basically, Long was a good choice for this role where someone gets turned into a walrus but you don't feel that bad about it.

Wallace is an insecure prick of a comedian, and very much of the zeitgeist: his podcast consists of Tosh.0-style mocking of people's internet video fuck-ups, and his "ironic" racism includes Nazi jokes and inaccurate imitations of his Hispanic girlfriend's supposed accent. He's just charming enough - or rather, they can remember when he was just charming enough - that Ally and Teddy can't quite bring themselves to say, "That's racist. STFU." But I - and many (most?) of the audience - am complicit in some of this. If you've never laughed at someone's stupidity-fueled misery on Youtube (Go! Bwah!), you're a better person than I. With the internet, viciousness is easy.

But while Wallace's material is current, there's nothing new about his white male hubris. During their initial meeting, Wallace and Howard Howe (Michael Parks, also in We Are What We Are, giving a brave, delightful performance here) reverently discuss Ernest Hemingway and Rudyard Kipling, and it's clear Wallace sees himself fulfilling this role of "young male adventurer" without care for whomever gets trampled in the process. Later, Howard brings Coleridge's The Rime of the Ancient Mariner** into the conversation, but Wallace doesn't catch the subtle warning there.

It's too late, anyways, because he's been drugged and will soon be subjected to a series of Regretsy-level surgeries that will turn him into a walrus...sort of. Meanwhile, even though they've been sleeping together behind Wallace's back, earnest-at-heart art-lovers Ally and Teddy set off to rescue him. And there's a battle scene it would be a crime to not release behind-the-scenes footage of that made me feel bad for snarking on Justin Long. He's a trooper.

And that's Tusk. Somewhere in between The Human Centipede's pure-shock surgery-horror and Boxing Helena's*** wannabe-artsy surgery-horror, with a million Canadian jokes thrown in. With something corny but affecting to say about tears. Maybe the tender way Teddy puts his arm around Ally as they leave a ludicrous but sad situation reminded me of the end of "The Colonel's Son" when a strict, bottled-up military father calls out in vain for his son who has decided to die with his zombie girlfriend.

It is what it is.


*"The Colonel's Son" was published in issue 117 of Granta. It's not available online, but there's a visual representation of part of the movie-within-the-story here. The story is included in Bolaño's collection The Secret of Evil.

**I recently reread "The Rime of the Ancient Mariner," and man, the mariner was a dick. After the albatross meets the sailors, it "every day, for food or play,/ Came to the mariner's hollo!" This sweet little (well, not little) albatross is having a good time playing with the crew and getting snacks, they probably named it Mr. Flap-Flap or something, and then this dick-face shoots it for no reason. Yeah, you ride on your zombie boat and think about what you've done, douchebow.

***Don't want to watch Boxing Helena? You don't have to, thanks to Jason MacIssac's in-depth review in its vintage 90s habitat.