Wow. So. Well. Are you vomiting and shaking right now? I have leftover cheesecake and I don't even know if I can eat it. I thought things were tense during last week's shoot-out, but holy shit, that was some laser tag compared to tonight. I don't even...how are we supposed to cope until next week? How are we supposed to process two more episodes?

So...how 'bout some comic relief and a reminder of the fun that can co-exist with this show? Sometimes? When things are not horrific? Four of these are even Gale-approved music-and-dance...oh, God, I don't even know if this will make it better or worse.

It turns out the turbulent relationship between Walt and Jesse is a perfect fit for the perpetual break-up songs of Taylor Swift, even if Tay-Tay has never (yet) watched a romantic rival choke to death on vomit or SPOILER sent an ex off to be tortured by goddamn neo-nazis. Geezus, I'm never recovering from that. Anyways, taking on the moving setpieces concept of Declan Whitebloom's video for Swift's "We Are Never Ever Getting Back Together," Teddie Films chronicles the drama surrounding Walt and Jesse's (then) latest falling-out. Major props to Eddie King for nailing Jesse's stoner voice and to the guy playing Hector for managing to look so darn deadpan throughout.

How freakin' charming is this mini-musical by YouTube greats Rhett & Link? With its faux DIY aesthetic and super-talented kids, it looks like Breaking Bad as directed by Wes Anderson. See if you can manage to not start laughing manically during mini Gus Fring's musical number. Oddly, both these first two videos change one small plot point by having Walt not spare Jesse the horror of putting Drew Sharp (aka dirt bike boy) in the acid barrel. I guess when these videos were made, Meth Damon wasn't enough of a breakout to bother parodying.

Jesse and Walt have a cooking show (apparently shot in a Google kitchen), but instead of Blue Sky, they're making pumpkin pie and turducken. Mark Douglas of Barely Political does the angry "Jesse!" hiss, and of course there's a montage with unexpected music choices and POV shots. And even Fake Jesse gets all the best lines.

We joke because we love, right? This entry in Screen Junkies' Honest Trailer series is heavy on the honesty, particularly with fans' obsessive behavior (cough) and the show's sometimes uncomfortable racial politics (this was before this half of the season's white power prison gang plot). But seriously, have you seen this show? How about we just watch the pilot? I promise you'll like it.

And here is Jimmy Fallon's Breaking Bad love letter, a 12+ minute parody set in the cutthroat stand-up world. With painstakingly reproduced shots and Breaking Bad's trademark callbacks ("no end"), this long skit was clearly a labor of love.

But really, who stops at under 13 minutes for a Breaking Bad parody? And doesn't even include musical numbers? A rat, that's who. Low budget and joyous, this hour-long musical by Jackie Johnson and Nadia Osman is a fan magnum opus. And there's a Gale song! There are also interpretive dance murders, a pretty hot Jesse, and terrible bald caps. It's at least 96% pure fun!

Weird Al Yankovic and Breaking Bad go together. Ok, not really. But Aaron Paul did portray Weird Al in Funny or Die's Weird: The Al Yankovic Story. And then Slacktory went and used Breaking Bad clips to meticulously craft a music video for Weird Al's appropriately weird lengthy ode to Albuquerque. Lydia is the girl of everyone's dreams (especially Todd's). 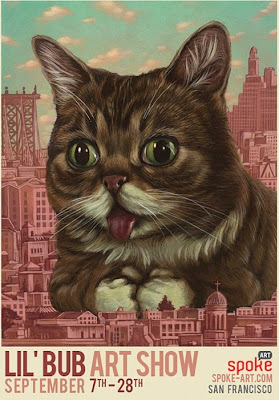 I've long been a fan of famous kitty Lil Bub. I wrote about her over a year ago, and have been following her on social media ever since. But when I learned there would be a Lil Bub appearance and art show at San Francisco gallery Spoke Art, I was conflicted. On one hand, I really wanted to go. On the other, I didn't know if I wanted to admit to myself and others that I would pay over $20 to meet a famous cat. But finally I decided, "Fine. I will be the sort of person who pays over $20 to meet a famous cat." Fortunately, I wasn't the only  one.


We're having a heat wave in SF (fyi that means in the 80s), and I am also apparently the sort of person - and in good company - who will stand in the blazing sun for over an hour and a half to meet a famous cat. Massive thanks to the lady who held my spot so I could go get a cold drink, since, winner that I am, I went alone.

I had been doing a lot of soul-searching regarding this famous cat visit (can one feel outrage about the NSA, concern over Syria, and still pay money to visit a famous cat?) and even more soul-searching regarding the art show. It reminded me of Gallery 1988's frequent themed events. I'd loved to have attended their Breaking Bad show (talked about here) if I lived in LA, but it also kinda feels like marketing. And that's a line pop surrealism/low brow has always skirted along. How are these images of pop culture being used? As satire, homage, metaphor, promotion? For fun? And if for fun, is there substance behind it as well? A friend and I wondered this when we attended a Todd Schorr exhibit at the San Jose Museum of Art in 2009. Schorr's work often features recognizable characters from film and cartoons. His large-scale paintings take exacting skill, but while some works used those characters to create deeper meanings, some seemed to be more along the lines of "I like movie monsters so I painted a whole bunch of movie monsters."

I wondered what the range of the art in this show would be. From what I could see of the works from the Breaking Bad show (and other pop culture shows), some artists really explored the themes and ideas in the series, and some just kinda drew Walt and Jesse. I also wondered if I were being too judgmental. After all, what is the substance of a still life?

However, I really enjoyed the Lil Bub art show. There are over 50 works, and they gave me a lot to think about: art, genre, intention. Also, they were, you know, pictures of a cute cat. So, on with the cat art!


Now here's a piece where I think, "Style versus substance? Who fucking cares!" I love this piece's Tara McPherson/Lisa Frank sensibility. Here's "space cat" Lil Bub, with a floating crown, in a beautifully colored landscape. There were a lot of "Lil Bub in space" paintings, since part of the "story" is that Lil Bub comes from another planet, but this was my favorite.

Sorry for the crappy pic, by the way. There were also a lot of "Lil Bub's head surrounded by flowers" pieces, but I liked what Nix Turner did here. Bub's graphite face and bow are pure kitsch, but instead of daisies and butterflies we get mushrooms and less "appealing" insects. I like this exploration of oddness and cuteness and how the two can oppose each other or intersect.

I feel like this piece made similar explorations. Lil Bub, while adorable, is a medical oddity. She was a "special needs" kitten and, while currently healthy, continues to need special care. With its depiction of fragility, beauty, decay, and kindness, this piece reminded me of Mary Oliver's poem "The Kitten."

Although real-life Bub has been known to ruthlessly attack bugs, another artist, Lilly Piri, depicts "different" kitty Bub and insects as kindred spirits. It's suiting - after all, Bub the champion of the strange is different than Bub the actual cat, who just wants pets and yogurt and would maybe like to eat a bug. I liked this charming contribution in Piri's delicate style.

I had deemed this a "pop surrealism masterpiece" in my mind before I even saw it was by the great Aaron Jasinski. An internet-famous cat. 80s cartoon nostalgia. Celebrities. Pop-tarts. If this isn't a slide in an art history class someday, I will be disappointed.

Isabel Samaras was another big name in the show. Her work is generally "pop culture figure in unexpected setting," and that's what we get here with Bub replacing E.T. I would not have had so many nightmares about that movie as a kid if the alien had been Bub instead!

This was one of the few pieces that looked critically at Lil Bub's fame, though none too harshly. With a quirky storybook style, Windisch shows both the silliness and joy in being a Bub fan.

There were two more watercolors by Hostetler of two of Bub's celebrity encounters, but this one, a portrait of Lil Bub and her "dude" (aka owner Mike), was one of my favorites of the show. It's a sweet reminder that at the heart of the Bub frenzy is just a guy and his beloved cat who loves him back. It's easy to forget that despite the fame, this story started off with a man who took in a stray, medically fragile kitten. His love and respect for Bub was shown in how this event was structured (more on that at the end of this post).

This fun silver ring of Bub popping out of a computer was one of the few non-paintings in the show (others included some yarnwork and a series of photos of a naked woman in a Bub mask). I'm not sure how comfortable it would be to wear, but it would be great for self-defense!

Here's another one of those "style versus substance"questions where I'm on the side of style. The project was to make art of Lil Bub, and O'Donnell did that in a gorgeous, entertaining way. Why not have a beautiful triangular painting of Lil Bub and geometric shapes in your living room instead of a painting of flowers? Why the hell not?

These are just a few of the many, many pieces at the show that stood out to me in some way. I'm sure others will have different favorites. There's a play on Schrodinger's Cat, Bub as a comic book character - even a "Heisenbub" for us Breaking Bad fans. I'm glad I decided to wave my crazy cat lady flag and get a ticket.

Update 9/11: Spoke Art posted all of the works here!


More about the event:

The event was limited to 300 people, which was probably too many, simply because of time constraints. While the wait was long and I'm not sure everyone got in, the slowness was for a good reason: Lil Bub's comfort and safety. Bub and her dude were stationed in a smaller gallery. They only let a few people in at a time so that it wouldn't get too crowded and overwhelming for Bub, and you were limited to one gentle pet. Bub was sitting on a blankie, and her dude was within arm's reach signing the books that were included with ticket purchase. She was very calm, but not lethargic - when an assistant waved a feather wand so she'd look at the camera for the family in front of me, she snapped to attention! I don't remember what compliments I babbled to the dude, but I told Bub she was a very good girl.