A Party at the Whedons': Much Ado About Nothing

After months of waiting, Joss Whedon's Much Ado About Nothing is out! Unfortunately, it looks like a very limited release so far. I get that Shakespeare, despite his endurance, isn't the biggest draw (Ralph Fiennes's fine Coriolanus got the shaft, release-wise), but although the showing I went to wasn't a sell-out, there were still a good amount of people there and the audience loved it - lots and lots of laughter. Plus, you'd think the distributors would try to cash in on that Avengers $$$, even if by resorting to misleading the uninitiated about what Much Ado About Nothing is...about.

But even if it doesn't have Avengers' explosions or Cabin in the Wood's horror or Angel and Buffy's vampires or even a Whedon script, the movie remains very Whedon. It's filmed in his Santa Monica house (well, mansion), which was designed by his wife, architect Kai Cole. And, as expected, the cast is chock-full of Whedon regulars. "I was expecting the 'grr...argh' at the end," a friend told me, referring to the closing-credits logo of Whedon's Mutant Enemy Productions. This isn't meant in a disparaging way. Even if familiar Whedon faces are all there, the actors stay true to the characters and the director stays (mostly) true to the story.

-No need to worry about Emma Thompson/Kenneth Branagh comparisons; Amy Acker and Alexis Denisof are funny and touching as this sharp, sweet, egalitarian couple. Both mastered not only the rapid-pace banter, but their respective slapstick scenes.

-Nathan Fillion was hilarious as vocabularily confused officer Dogberry. Absolutely perfect. As I had hoped, his acting was hammy without being too over-the-top. And he was was well matched with his ensemble of wide-eyed cops.

-Whedon's promise that they "stressed the human, not the hymen" proved true. Although Leonato's reaction seems a little extreme for just a cheating allegation (versus being devastated because his sole heir and genetic lineage is now not marriageable because a penis entered her vagina at the wrong time), Clark Gregg quickly and fairly smoothly has his character come back to senses. And Fran Kranz manages to add some depth and hesitation to Claudio's desertion.

-They handled the Shakespearean text/modern times juxtaposition really well. A few things do inevitably seem odd (duels? counts? you thought a girl died from fainting on the lawn?), but it mostly worked. Other adaptations, like Romeo + Juliet and Coriolanus, have used modern technology, but it felt more seamless here. I especially liked the TMZ-style video of Don John getting arrested.

-Speaking of which, thank you, River Tam's big brother, for not being Keanu Reeves. Sean Maher captured the villain's terseness without sounding like he was reading off cue cards. Unexpectedly, the cupcake-stealing Don John and his associates Conrade (Riki Lindhome of novelty duo Garfunkel and Oates) and Borachio (Spencer Treat Clark) were kind of...adorable. The trio is hot, mod, and a little silly. How do you not love them dog paddling across the pool after setting their evil "let's ruin this wedding, haha!" plan into motion? (Related note: how did act 1, scene 3 become "the sexy scene"? First Branagh has Richard Clifford give half-naked Keanu a rub-down, and now Whedon has a female Conrade turning "Can you make no use of your discontent?" into a come-on.)

-Really, the whole cast was great. I was happy to see Ashley Johnson, the cute waitress from Avengers, as Margaret, the maid who has no idea her sexy times with Borachio are serving a sinister purpose. As Hero, Jillian Morgese (also an Avengers extra) was innocent and likable and had cute father-daughter chemistry with Clark Gregg.

-I was impressed, and my awesome musician roommate was thrilled, that Whedon worked the play's song, "Sigh No More," into the film.


What I was iffy about:

-They kept the act 5, scene 4 line, "I'll hold my mind, were she an Ethiope," by which Claudio promises to wed fake-replacement-Hero even if she's African. (Charitably, I suppose you could interpret Claudio as promising to wed this girl who supposedly looks exactly like Hero even if she looks nothing like Hero. Spoiler alert: it's actually Hero.) This is tricky. Obviously, we'd all prefer that the line had never been written like that, but unfortunately it was. So what to do with it? I reflexively lean towards cutting it, but I see that's objectionable. I don't know this text as well as A Midsummer Night's Dream, so without re-reading I'm not sure how much text was cut or altered besides in relation to axed character Antonio. In this version, Claudio says the Ethiope line right in front of a black wedding guest, prompting the audience to laugh at him for being such an oblivious ass. But that just makes that black extra a prop to assuage white guilt - especially glaring since the cast was pretty much all white.

-Borachio's character was sort of all over the place, but I didn't feel this was the actor's fault.

-I'm ambivalent on the flashbacks of Beatrice and Benedick's previous love affair. I think Whedon wanted to make it clear he was not onboard with slut-shaming Hero by showing that fan faves have sex too, but it puts a different spin on the budding B&B relationship. Like, why did they break up before and why will this time be different?

-The white wine (there was drinking in pretty much every scene - I thought it would end like Hamlet, just with all the deaths from alcohol poisoning) looked exactly like water, which it probably was. Maybe they could have used white grape juice? I have no idea what would look clear but not too clear on camera in black and white.

-That's about it. I really loved this, and I hope more people watch it. 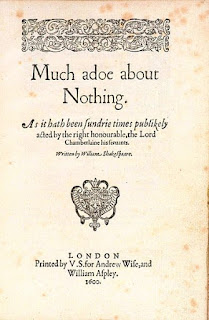