I finally saw The Avengers a few weekends ago and became an obsessed fangirl, so I had to watch Thor. In Thor, Loki, already dealing with Scar/Mufasa jealousy issues with his brother, is even more shaken by the revelation that he's adopted, which basically goes like this: "Your birth father is our lifelong enemy and I actually stole you as a baby in case I needed you for diplomatic reasons in the future. You probably have some questions, but I'm going into comatose state now." Loki handles this news really, really badly (scheming to win his adopted father's love by killing his birth father and also genocide, attempting suicide, getting in way over his head with brutal alien species the Chitari, trying to subjugate all of humanity, etc) but despite everything, you kinda hope brothers-turned-enemies Thor and Loki can work it out. Maybe they can have a sit-down with King Arthur and Sir Kay, although Loki reeeeeally does not seem interested in the Sir Kay "know what I'll just ride on my adopted brother's coattails and provide comic relief" route right now.

Really this is just an excuse for me to ramble about my favorite fake siblings, from the inseparable to the murderous.

He may be the patriarch of a douchey Orange County family and not the king of Asgard, but George Bluth, Sr. definitely one-ups Odin. Not only does he encourage sibling rivalry between enthusiastic but not terribly bright or adored firstborn George Bluth, Jr. (a.k.a. GOB) and perennially exasperated, sole competent sibling Michael, but he turns their forced childhood fights into a successful line of underground videos. The lone sister is vain, shallow Lindsay, who, just like Margot Tenenbaum of The Royal Tenenbaums, is blonde, adopted (spoiler), and marries a much older crunchy doctor-type to rebel (I guess that's just what you do when you're the blonde only daughter of a dysfunctional wealthy family). Youngest child Buster is the indulged baby of the family, despite being well into his thirties. Even with all their differences and clashes involving telenovela stars and loose seals, they share a bond that can only be forged by the shared childhood terror of your father repeatedly throwing a prosthetic arm at you.


Poor Michael Bluth has no confidant for dealing with his crazy siblings, but at least eldest Bennet sisters Elizabeth and Jane have each other to help weather the storm that is their frantic, marriage-obsessed household. They're the responsible, intelligent counterpart to their two youngest sisters: the boy-crazy, impulsive Lydia and Kitty. (No1curr about middle child Mary.) Although Jane is the eldest, her kindness and shyness make her vulnerable, and Elizabeth is just as protective of her as Mr. Darcy is of his guileless BFF Mr. Bingley. Darcy's and Elizabeth's desires to protect their own halves of the adorable baby bunny coupling that is Bingley and Jane end up putting them even more at odds than they were before. Fortunately, after some pride/prejudice/oops-forgot-to-tell-you-that-one-guy's-a-pederast stumbles, Darcy and Elizabeth come to an understanding, the BFFs become brothers-in-law, and the eldest Misses Bennet get to leave crazytown.

The Virgin Suicides - the Lisbon sisters

The doomed, dreamy Lisbon sisters linger in the minds of their unnamed admirers long after their deaths (spoiler alert?), just as they linger in the minds of readers of Jeffrey Eugenides's debut novel long after the book is finished. Therese, Mary, Bonnie, Lux, and Cecilia are all different in temperament and interests, but form one sisterly mass. While the girls' bond comes in part from the shared social isolation imposed by their awkward, conservative parents, even when out of the house the sisters show little desire to separate themselves. Among the upheaval of the 70s and the repression of their home life, the sisters have created their own little world.

After Dark - Mari and Eri Asai

Younger sister Mari is the serious student. Older sister Eri is the beautiful model. But now Eri, depressed and addicted to pills, has fallen into a stupor and rarely leaves her bed. To escape the stifling atmosphere at home, Mari spends her nights drinking coffee and reading at a Tokyo Denny's. On one of these nights, she encounters an acquaintance from her and her sister's past, and is soon pulled into an all-night adventure involving a retired female wrestler and a human trafficking ring. But the most difficult thing Mari has to do is get past the years of resentment and her reflexive withdrawal to remember and reconnect with a big sister who would protect her in darkness. 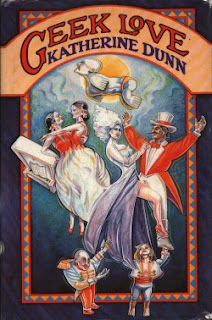 The Lisbon siblings' isolation has nothing on the Binewskis'. The children of this family are children, yes, but they're also products: bred specifically for the freak show at their parents' traveling carnival. They don't attend school, and besides a few carnival employees, they have no companions other than each other. The siblings are charismatic and flippered Arty, conjoined twins Electra and Iphigenia, hunchbacked albino dwarf Oly, and powerfully psychic but gentle Chick. Their sequestered lives continue without change until Arty stumbles upon a business venture far more lucrative than a carnival: a cult. As Arty's megalomaniac tendencies run further out of control, the siblings' close-knit bonds turn to tragedies of passion and jealousy.


Sure, River Tam might be deadly and prone to erratic fits and will spy on you having sex, but she's still a way less annoying Joss Whedon younger sibling than Dawn Summers. Hell, Avengers' Loki's a less annoying Joss Whedon younger sibling than Dawn Summers, and he killed Agent Coulson and kept the Avengers so busy that Thor didn't even have time to bang Natalie Portman on his return trip to Earth. In cult classic series Firefly, young doctor Simon Tam boards spaceship Serenity with a strange box - which turns out to hold the naked body of a young woman in stasis. The young woman is his sister, River, who has had her brain torn apart by the government to make her into a psychic assassin. Extremely (extremely extremely) devoted Simon has risked everything to rescue her, and now the brother and sister are on the run, hiding out on Serenity. By turns endearing, terrifying, and kick-ass ("I can kill you with my brain"), River is eventually embraced by the rest of the crew.

Can you really call them - or anyone in James Joyce's Finnegans Wake - characters? They're more...concepts...and the figures mostly known as Shem and Shaun are the ultimate concept of the two brothers: forever opposites and forever united. The sons of two other figures in the book, Humphrey Chimpden Earwicker and Anna Livia Plurabelle, Shaun is the "good" conformist brother and Shem is the screw-up troublemaker. They are a seemingly endless list of opposing but eternally connected brothers: Cain and Abel, Esau and Jacob, and alcoholic writer James Joyce and his own straighter arrow brother Stanislaus. Michael Bluth and Thor are definitely Shauns, and GOB and Loki are definitely Shems. Which are you?