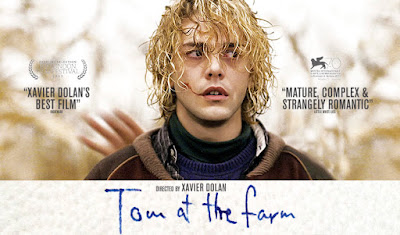 I'm new to the work of director Xavier Dolan, who is new to the world, having been born in 1989. Despite not yet reaching 30, the Quebecois Dolan recently finished his sixth full-length movie. Tom at the Farm/Tom a la Ferme is his fourth; while it was released in 2013, it only got its stateside viewing last week.

Tom at the Farm is an adaptation of the Michel Marc Bouchard play, and actors Lise Roy and Pierre-Yves Cardinal reprise their stage roles. I haven't seen or read the play (the San Francisco Public Library's copy is currently MIA), so I don't know how closely this version follows it. Regardless, it stands on its own as an artsy thriller.

After the sudden death of his boyfriend Guy, cosmopolitan Tom (Dolan) leaves Montreal to attend the funeral in Guy's distant, rural hometown. He finds Guy's dreary childhood farmhouse (a place with no cellphone reception, always a red flag in movies) and meets Guy's mother, Agathe (Roy), who doesn't know who he is, and Francis (Cardinal), the older brother Guy never mentioned, who knows exactly who he is. Guy left home at sixteen, and the story that has been relayed to Agathe from Francis is that Guy (proper name Guillaume, as Francis firmly insists on calling him) was straight and had been in a long-term relationship with a co-worker named Sarah.

Francis violently forces Tom to play out this lie, and this eventually leads to him also violently keeping Tom at the farm. Cardinal brings such a frightening, alluring mixture of subtlety and raw physical power to the brutish Francis that it's clear why Dolan brought him on for the film. While Tom's first instinct is to get away from this hick bully, he's also drawn to Francis. Francis reminds him of Guy, both in appearance, and, it's hinted, in the sexual roles they find themselves playing. When the two fall into a perfect tango and Francis asks Tom who taught him to dance, he doesn't answer and doesn't need to. This might shed some light on Tom and Guy's relationship, but more so and alarmingly, it seems to illuminate what Francis and Guy's was.

Soon, it's not just the fact that Francis removed his car's wheels that's keeping Tom at the farm. When Tom uses the farmhouse's landline to call the real Sarah, it's not a plothole that has made him forget he had that option all along despite his useless cellphone. But whether he's made the choice to stay willingly or has succumbed to Stockholm Syndrome, the farm is still a place of danger. Shortly after a revelation chillingly scored to Corey Hart's cheesy 80s hit "Sunglasses at Night," Tom must rethink his decision.

I can see Tom at the Farm being one of those "love it or hate it" pieces: it's beautiful and intense, but its lack of defined answers will be aggravating for some. This is a movie where everything is implied, and you have to put the pieces together yourself or even just say "screw it" and commit to your own interpretation with little to no evidence. What does an empty table mean? What about twin beds pushed together? Lise Roy's excellent performance feeds into this ambiguity - it's clear she's anguished, but it's uncertain what she knows about either of her sons.

Tom at the Farm is currently playing at the 4 Star Theatre in San Francisco.